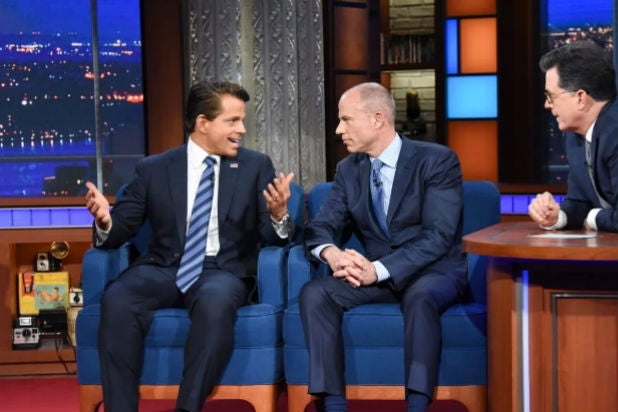 Stormy Daniels lawyer Michael Avenatti and former Trump spokesman Anthony Scaramucci gave “The Late Show” audience a hint of what they might look like as a TV duo, but didn’t give host Stephen Colbert any insight into their possible plans Wednesday night.

It was reported last month that a political talk show starring the two was a possibility. Colbert sought specifics, starting things off with, “My first question is, what is this? And… why is this?” before he asked outright about their potential together.

Avenatti joked that their show would have been “the male version of ‘Thelma and Louise,'” and then the pair demurred and said only that they know each other through a mutual friend and once had a drink together.

Avenatti also opined that President Trump is in a bad spot because of his former lawyer Michael Cohen’s legal problems. He said that’s “what happens when you trust your innermost secrets to a moron.”

Earlier Wednesday, ABC reported that Cohen has lost his legal defense team, and might cooperate with the special counsel Robert Mueller’s investigation.

“There are rumors that he’s going to flip or that he’s about to be arrested,” Colbert said. “Which one do you think is about to happen?”

“I think both are going to happen,” said Avenatti. “I predicted a couple of month ago that Michael Cohen was going to be indicted, that he was in a whole heap load of trouble. And I think we’ve seen that play out over the last couple of months. There’s no question in my mind that he’s going to be indicted. And there’s no question in my mind he’s going to flip on the president. I think Michael Cohen is in a very, very bad spot. And I think the president is in a very, very bad spot, because this is what happens when you trust your inner-most secrets to a moron.”

Watch the clip from the interview below: