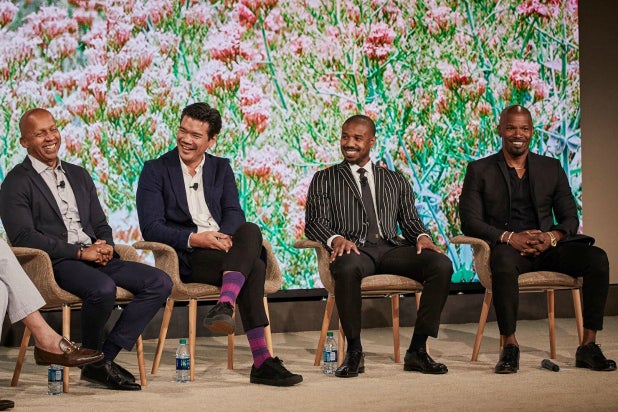 Michael B. Jordan is no stranger to taking on roles smothered in social justice: Whether it’s telling the tragic story of Oscar Grant, unarmed and killed by police in Oakland in “Fruitvale Station”, or embodying the oppression so many black people in America feel in his villain turn as Erik Killmonger in “Black Panther”. Jordan is familiar with carrying that weight.

His next film, “Short Term 12” filmmaker Destin Cretton’s “Just Mercy,” is no different.

In Warner Bros.’ short teaser shown during the CAA Amplify summit in Ojai, California on Tuesday, Jordan commanded the screen in his portrayal of real-life author, activist and Civil Rights defense lawyer Bryan Stevenson. Jamie Foxx, who stars alongside Jordan as wrongly convicted death row inmate Walter McMillian, also gives an emotional performance in the film which is slated for a Jan. 2020 release.

Also Read: Michael B. Jordan Says Since 'Fruitvale Station,' 'Every Historical Black Figure Has Come Across My Desk'

“When I got to know Bryan; his story, his work, everything he was about and how much of his own personal life he had sacrificed, I was nervous,” Jordan said at a panel discussion during CAA’s Amplify summit, which is focused on raised diverse voices in Hollywood and sparking social change.

“I was like, ‘Man this guy is damn near perfect I don’t want to mess this up’ — I know how important this is,” Jordan continued. ” You talk about ‘Fruitvale Station’ and Oscar Grant for me was another one of those roles I was so proud to be a part of…as a young black man Oscar could have been me, I took that very seriously.”

“Just Mercy” follows Stevenson as he recounts his experiences and details the case of a death row inmate whom he fought to free.

“Here’s the situation,” Foxx said to Stevenson during the panel. “He cares so much to get you right.”

Stevenson said during the panel that he hopes the film adaptation, written and directed by Cretton, helps to usher in an era of “truth and justice,” which he said we’ve never had that in this country.

It was also clear that Cretton felt similar pressure to Jordan to do the story justice. Putting his own self doubt and neurosis aside, Cretton said that because of the moving work of Jordan and Foxx, “Just Mercy” is a very easy movie for him to be proud of.

“It’s like I’ve been able to swim in Bryan’s spirit, and it was, for me personally, an extremely life-changing experience,” the director said during the panel.

“I prayed a lot in the absence of Bryan,” Jordan added. “I asked for him to be around me, to give me that comfort to just be there with me while I’m telling his story and I think things like that for me make a difference…just to have him around me. So yeah that may be me up on screen, but I want you guys to feel and see it’s him.”