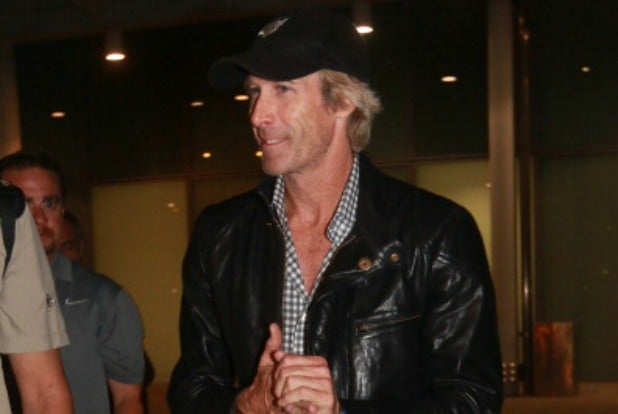 You come at Michael Bay with an air conditioner, you best not miss.

According to a statement by Paramount, an allegedly intoxicated man approached Bay on the set of his movie “Transformers 4” in Hong Kong “wielding an air conditioner unit as a weapon.”

The “Bad Boys” director ducked, took control of the air conditioner unit and stepped aside as security engaged the assailant and his two compatriots. They subdued and arrested the three men.

“Some drugged up guys were being belligerent asses,” Bay wrote in a post on his own website. They tried to extort him, and when he refused their demands they left only to return and try to attack him.

Bay described his assailant as “a Zombie in Brad Pitt‘s movie World War Z” — a reference to a fellow Paramount movie. Check.

“He actually bit into one of the guards Nike shoe, insane. Thank god it was an Air Max, the bubble popped, but the toe was saved,” Bay wrote. “Then it took fifteen Hong Kong cops in riot gear to deal with these punks. In all, four guys were arrested for assaulting the officers.”

Paramount and Bay issued the statements after a report in Reuters that two brothers surnamed Mak, approached Bay and  demanded the equivalent of $12,900, according to a police spokeswoman. It was unclear why they demanded the money, but the older brother then assaulted the director, police said.

Also read: ‘Transformers 4': First Look at the Explosions You’ll be Paying to See Next Year (Video)

That report also said that Bay suffered injuries to his face, but Paramount’s statement contradicts that report.

“No one on the cast or crew was injured and the production immediately resumed filming without further incident,” Paramount said.

The movie has been in production since late May.

Yes, the story is being passed around is not all true! Yes, some drugged up guys were being belligerent asses to my crew for hours in the morning of our first shoot day in Hong Kong. One guy rolled metal carts into some of my actors trying to shake us down for thousands of dollars to not play his loud music or hit us with bricks.

Every vendor where we shot got paid a fair price for our inconvenience, but he wanted four times that amount. I personally told this man and his friends to forget it we were not going to let him extort us. He didn’t like that answer. So an hour later he came by my crew as we were shooting, carrying a long air conditioner unit. He walked right up to me and tried to smack my face, but I ducked threw the air unit on the floor and pushed him away. That’s when the security jumped on him. But it took seven big guys to subdue him. It was like a Zombie in Brad Pitt‘s movie World War Z–he lifted seven guys up and tried to bite them. He actually bit into one of the guards Nike shoe, insane. Thank god it was an Air Max, the bubble popped, but the toe was saved.

Then it took fifteen Hong Kong cops in riot gear to deal with these punks. In all, four guys were arrested for assaulting the officers.

After that, we had a great day shooting here in Hong Kong.

“Contrary to several erroneous news reports made today, Bay did not get hurt in a fight on set. The production company did have a bizarre encounter with a man (allegedly under the influence of a narcotic substance) who was wielding an air conditioning unit as a weapon. The man, who had earlier accosted several other crew members, rushed onto the set in Quarry Bay and swung the air conditioning unit directly at Bay’s head. The director ducked and wrested the air conditioner from his attacker, preventing what could have been a serious accident. The company’s security team quickly stepped in and subdued the assault.  The police, who also scuffled with the assailant and two of his companions, ultimately arrested the three men. No one on the cast or crew was injured and the production immediately resumed filming without further incident.”