Well, Sandra Bullock now has something to do the night before the Academy Awards.

The "Blind Side" actress, widely seen as a strong contender for the Best Actress Oscar, is also now a Worst Actress nominee for the Golden Raspberry Awards, the tongue-in-cheek annual salute to the year’s worst films. Bullock was nominated for her role in "All About Steve."

The Razzies take place the night before the Oscars, and will be held this year at the Barnsdall Gallery Theater in Los Angeles.

Nominees typically do not attend, although Halle Berry did show up to accept her award for "Catwoman" — carrying the Oscar she’d previously won for "Monster’s Ball." 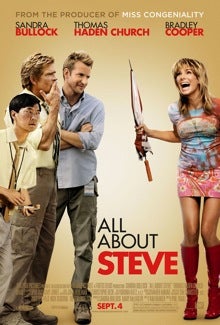 Top nominees in the Razzie nominations were the Michael Bay action film "Transformers: Revenge of the Fallen" and the Will Ferrell comedy "Land of the Lost," both of which picked up seven nominations. Besides those two films, the Worst Picture nominees include "All About Steve," "Old Dogs" and "G.I. Joe: The Rise of Cobra."

The Razzies also added three "Worst of the Decade" awards — or, as they called them, "Worst of the Uh-Ohs." The Worst Picture of the Decade contest should see a particularly cutthroat competition between John Travolta’s sci-fi disaster "Battlefield Earth" and the Ben Affleck/Jennifer Lopez dud "Gigli," although "Freddy Got Fingered," "I Know Who Killed Me" and Madonna’s "Swept Away" are also contenders.

Worst Picture:
“All About Steve”
“G.I. Joe: The Rise of Cobra”
“Land of The Lost”
“Old Dogs”
“Transformers: Revenge of The Fallen”
(AKA “Trannies, Too”)

Worst Remake, Sequel or Rip-Off:
“G.I. Joe: The Rise of Cobra”
“Land of The Lost”
“Pink Panther 2” (A RIP-OFF OF A SEQUEL TO A REMAKE)
“Transformers: Revenge of The Fallen”
“Twilight Saga: New Moon”