The latest installment of Buble’s holiday variety show was filmed in early November in the singer’s hometown of Vancouver, but through the magic of television, viewers will be none-the-wiser. And it was not hard for the modern crooner to get in the holiday mood a little early, Buble told TheWrap.

“Once Halloween hits, I start feeling Christmas,” he said. “I start smelling it in the air. The second I hear those songs, it’s like I’ve missed them so much from the previous year that it puts me in the spirit right away.”

With the two Christmas specials, NBC is continuing its song-and-dance routine this month. “The Sound of Music Live,” starring Carrie Underwood, delivered the network its top Thursday since 2009’s “ER” finale. More than 18 million people tuned in, and the social media buzz felt even larger.

While Buble didn’t see the “Sound of Music Live,” he says that it was a “great decision” for Underwood — and not a safe one. “I just thought, ‘Wow, this girl has pretty big balls,” he told TheWrap.

If Buble’s holiday special performs closer to the monster-hit “Sound of Music Live” than his new NBC-colleague’s modestly rated “Kelly Clarkson’s Cautionary Christmas Tale,” which earned a 1.4 rating in the demo and 5.3 million viewers, the network will be over the moon. But that is both a tall order and an unlikely outcome. 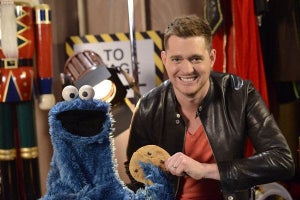 In tonight’s special, Buble has fun with his holiday duets, offers some organic crowd work when he spots the ugliest Christmas sweater of all time, and even lands a few good jokes about his contemporaries — the pop stars he prefers to be compared with instead of the easy Rat Pack option.

While he’ll be singing Christmas classics such as “The Christmas Song,” “Rudolph the Red-Nosed Reindeer,” “I’ll Be Home for Christmas” and “Let It Snow” in a variety show that may seem like it’s from another time, Buble does not want to be classified as an old-school artist.

“I’m a modern kid,” he told TheWrap. “My biggest hits are songs that I wrote. I sit on Top 40 with Katy Perry and Justin Bieber. I never wanted to be a throwback artist, I don’t want to live in another time — I certainly don’t want to have anything to do with being a retro act.”