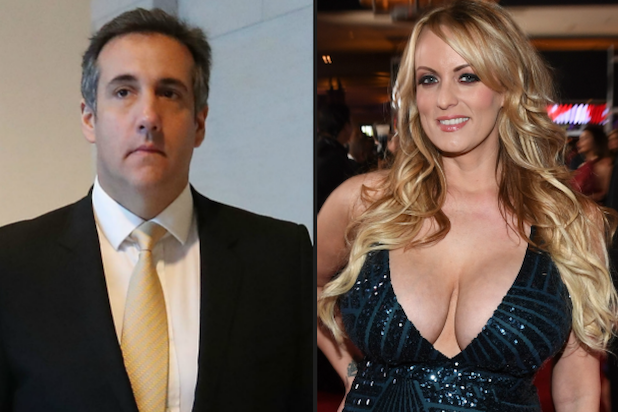 On Wednesday, Cohen admitted in court that Trump had directed him to make payments to Daniels and McDougal in order to stop them from speaking out publicly about their affair with the president.

“It strengthens our case,” Daniels’ lawyer Michael Avenatti told TheWrap. “This was an admission under oath of Michael Cohen and ultimately the president.”

Daniels, whose legal name is Stephanie Clifford, sued the president in March, saying that a hush agreement she signed in October 2016 to prevent her speaking about her affair with Trump was void because, among other things, it violated campaign finance laws.

“Michael Cohen’s guilty plea yesterday and his statements in court prove Stormy Daniels’ allegations that the hush money agreement is invalid, unenforceable and void because it was at its essence an illegal contract,” Genie Harrison, a Los Angeles civil trial attorney, told TheWrap.

“It’s a big deal because Stormy Daniels was right to file that case. It shows she was pressured into signing the hush-money agreement, which was not in any way fair to her,” Harrison added.

According to Avenatti, Cohen’s admission will allow him to proceed with a deposition of Trump in that lawsuit, which could force the president to testify. The lawsuit was stayed by a judge pending the resolution of Cohen’s criminal case.

“On September 10 there will be a hearing before judge [James] Otero, who is the presiding judge over our case, and that judge will make a determination as to whether the stay gets lifted and we expect that he’s going to do so,” Avenatti said.

But not everyone is convinced that Cohen’s admission is a coup for Daniels.

“I don’t know how that would implicate any of the claims that Avenatti has against Cohen or Trump,” Jens David Ohlin, law professor at Cornell University, told TheWrap. “Whether Daniels should be allowed to speak or not and whether or not the agreement is enforceable, I’m not sure if that turns on whether or not that they violated federal elections laws when they spent money on the agreement.”

Cohen’s admission could have an affect on another case as well. In March, Daniels amended her defamation case against Trump to add Cohen. Daniels said that Cohen had defamed her by insinuating she had lied about her affair with the president.

“It was reasonably understood Mr. Cohen meant to convey that Ms. Clifford is a liar,” the complaint, obtained by TheWrap, read.

Now that Cohen has admitted to lying about the hush-money agreement, that could be used against him in other cases, according to experts.

“It certainly is going to have an effect in defamation case,” Harrison said. “His admission of lies as a result of his guilt plea will certainly be included in this case and the jury will be instructed that if he’s not believable about one thing he says, then they can choose not to believe him in another instance.”

Cohen’s admission to “causing” an illegal donation to Trump’s campaign through his involvement in the $150,000 hush payment American Media Inc. made to McDougal in 2016 could also expose the publisher to criminal liability too, according to Avenatti.

“I think that AMI may have been open to legal exposure well before this but this certainly enhances the likelihood that there’s going to be fallout that’s going to reach AMI,” he said.

“It exposes AMI as a co-conspirator in the campaign finance charge for participating with Cohen in his admitted unlawful conduct,” Shapiro told TheWrap. “But if they were going to go after AMI, they probably would have done it by now. They got what they wanted out of this, which is Cohen.”