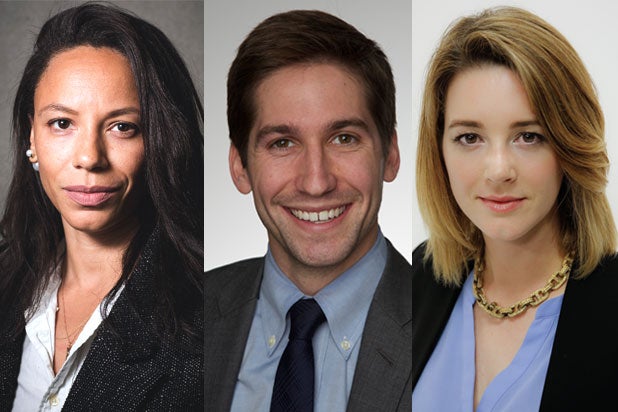 Holmes, Kitada and Pariseau will report directly to De Luca and be based at the company’s West Hollywood offices.

“I am delighted to say that we have assembled a dream team of executives who bring diverse expertise, impeccable taste and first-rate production experience,” said De Luca. “I am thrilled about having Elishia, Lucy and Johnny on the team.”

Holmes most recently served as senior VP of production and development at Scott Free, where she developed films such as Ridley Scott‘s “Exodus” and the “Blade Runner” sequel that will be directed by Denis Villeneuve. She also shepherded “Morgan,” a sci-fi thriller currently in production with Luke Scott making his directorial debut; “Narco Sub,” which has Liam Neeson attached to star; and “Wool,” based on the bestselling book series by Hugh Howey that Nicole Perlman will adapt.

Prior to working at Scott Free, Holmes served as a production executive at Warner Bros. where she worked on such films as “Sherlock Holmes,” “The Dark Knight,” “Crazy Stupid Love” and “The Book of Eli.” She began her career at the William Morris Agency and got her first break as a story editor at Walter Parkes and Laurie MacDonald’s company Parkes-MacDonald.

Kitada was most recently the director of development at Marc Shmuger’s Global Produce, where she worked in both features and television. Prior to Global Produce, Kitada worked at Disney, DreamWorks and at Mark Johnson’s Gran Via Productions on acclaimed films and TV shows including “Saving Mr. Banks,” “The Help” and “Breaking Bad.”

Pariseau is transitioning from his position as an agent in UTA’s book department, where he represented authors, journalists and non-traditional intellectual property for film and television, often working with the industry’s top publishing agents. Pariseau worked with clients such as the Elmore Leonard estate, Ariel S. Winter, Matthew Ward, Robin Givhan and Conn Iggulden. Pariseau joined UTA in 2010 and was promoted to agent in April 2013.

“Johnny has been a great UTA colleague, and his creative instincts and excellent taste in material will be huge assets as an executive. We look forward to working with him in his new role,” said UTA managing director David Kramer.

Relaunched in 2015, Michael De Luca Productions is a film and television development and production company that focuses on producing provocative specialized and commercial content, working with visionary filmmakers and discovering new talent. The company was founded by president Michael De Luca, the veteran producer who has been nominated for three Best Picture Oscars —  David Fincher’s “The Social Network,” Bennett Miller’s “Moneyball” and Paul Greengrass’ “Captain Phillips.”