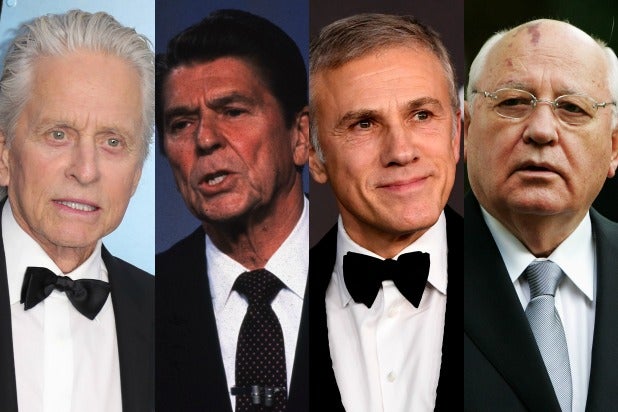 Michael Douglas and Christoph Waltz will star as former president Ronald Reagan and his Soviet counterpart Mikhail Gorbachev in a limited series in development at Paramount TV Studios.

Douglas will play the 40th U.S. president while Waltz will play Gorbachev, who was General Secretary of the Communist Party for the Soviet Union from 1985 until its dissolution in 1991. The series is called “Reagan & Gorbachev.”

The project, which currently doesn’t have a home, chronicles the 1986 Reagan-Gorbachev Summit in Iceland, which is described by many historians as the turning point in the Cold War. The two-day gathering in Reykjavik laid the groundwork for a historic arms accord the following year and is considered one of Reagan’s finest moments as president. The series will be told from the vantage point of Ken Adelman, who was Reagan’s arms control director.

The series is being adapted from Adelman’s book “Reagan at Reykjavik: Forty-Eight Hours That Ended the Cold War.” Jamie Foley will direct and executive produce with Douglas, Waltz and Youtchi Von Lintel. It is being adapted by B. Garida. Foley is best known for directing “Fifty Shades Darker” and “Fifty Shades Freed.”

“Reagan & Gorbachev” is currently being shopped to both broadcast networks and streaming services.

Deadline was first to report on the project.