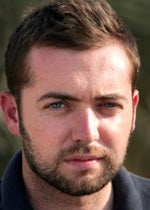 Michael Hastings, the Rolling Stone freelancer who sparked a firestorm of controversy over his profile of now-ousted General Stanley McChrystal, just signed a book deal.

According to Forbes, Little, Brown won the Hastings sweepstakes.

A forthcoming UNTITLED book by renowned journalist Michael Hastings, author of the Rolling Stone article "The Runaway General" which revealed shocking truths about General McChrystal and the war in Afghanistan, that promises an unprecedented behind-the-scenes account of America's longest war, to Geoff Shandler, Editor in Chief, Little, Brown and Company, by Scott Moyers at the Wylie Agency.

The book will offer an unfiltered look at the war, and the soldiers, diplomats and politicians who are waging it. Based on exclusive reporting in Afghanistan, Europe, the Middle East and Washington, D.C., this landmark work of journalism will elucidate as never before our deeply troubling war in vivid, unforgettable detail.

Little, Brown Publisher Michael Pietsch says, “In his brilliant article Michael Hastings has already given us the clearest of insights into the disaster of America’s war in Afghanistan. He is a writer of extraordinary talent and his book will take us deeper and further into the war and its major architects, at a time when we need that clarity desperately.”

Hastings has already written and published a book about the war in Iraq — and the story behind that one wasn't without its own controversy.

The book, "I Lost My Love in Baghdad," was focused on his relationship with Andrea Parhamovich, a civilian who was killed in an ambush there. In an editor's letter, Newsweek editor Jon Meacham said Hastings, then Newsweek's Baghdad correspondent, had plans to ask Parhamovich to marry him in Paris.

According to a 2007 FishbowlNY report, Hastings' book proposal — containing "intimate emails and text message transcripts" — "landed at the Wylie Agency three weeks after Parhamovich was killed in Baghdad."

In its review of the book, the New York Times said "a whiff of exploitation hangs over 'I Lost My Love in Baghdad.'"