We must once again reassess Michael Jackson. The fans don’t want to hear it. The pop star died 10 years ago at age 50 and thus cannot face evidence or testimony in a court of law.

But the heartbreaking accusations of sexual abuse offered in unflinching detail by Wade Robson and James Safechuck in the new HBO documentary “Leaving Neverland” cannot be ignored. Their stories must be heard and considered in all their terribleness. And we must remember the star’s other past accusers, whose accounts line up with these latest ones.

Robson was 7 when he said Jackson first molested him. He said the “sexual stuff” continued until age 14.

Safechuck was 10, he said, and the abuse continued well into his teens.

The accusations play like classic pedophilia, except it’s not some seedy guy in a van with blacked-out windows. It’s Michael Jackson, the artist who loved children more than anything and wanted to heal the world. And who repeatedly denied ever molesting children during his lifetime.

Robson and Safechuck’s accounts were taken separately by filmmaker Dan Reed and unfold slowly in four hours of documentary. In a powerful interview with Oprah Winfrey on Monday after the documentary aired on HBO, Robson and Safechuck said they had not met during the filmmaking. But their experiences were markedly similar. 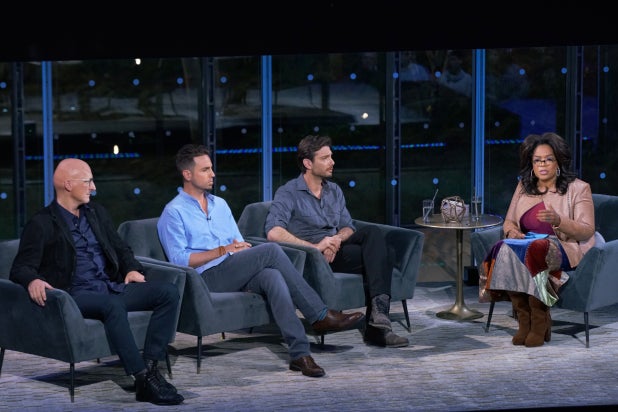 Bennett Raglin for Own Network

And in both cases the implications for their emotional lives were deep. Robson, who went on to become a successful choreographer, hit a wall when he had a child himself. But for years, he said he buried what happened: “I didn’t feel it was abuse,” he said. “I didn’t feel I was hurt by it. That anything bad happened to me. At that point, I loved MIchael, Michael loved me — that happened between us. That’s it. I had no feeling that I was affected negatively.”

That was the case until he said he could no longer function, had a nervous breakdown, lied to a therapist like he’d lied to everyone else, including in court. Then he had another nervous breakdown, he said, and ultimately confessed to his therapist about what he says happened.

Safechuck is still actively struggling, and said so. He is confronted by deep feelings of self-hatred, which he doesn’t understand. He too has a child, and found the damage bubbling up as he confronted fatherhood. Because he loved Michael Jackson.

“It was two feelings together,” he said in the interview with Winfrey. “He does these things that are harmful but you still have love for him. I’m still grappling with that.”

Viewers must judge for themselves what is credible, because definitive proof is elusive. But if we have come to a place in the #MeToo era where we choose to hear accusers out instead of dismiss them as fame-seeking, money-grubbing climbers, then Robson and Safechuck need to be taken seriously.

We must also consider them in the context of two allegations of the past, Jordy Chandler — who accepted a $25 million settlement in 1993 after filing a civil suit accusing the star of molestation — and Gavin Arvizo, who was the plaintiff in a 2005 case when Jackson was acquitted of lewd acts on a minor.

As a reporter who covered Michael Jackson for years The Washington Post and then The New York Times, I found the accusations against Jackson discomfiting and weird, fascinating and bizarre.

It seemed possible that Jackson, as an artist who projected a permanent childlike state, was not sexual at all. He seemed more like a man trapped in childhood than a predator. He seemed neither gay nor straight. We all heard rumors that a sperm donor from his vast network of medical fixers parented his three children. We knew he slept in the same bed as young boys.

Maybe he really was Peter Pan?

These ideas wither in the wake of these new accounts. And it means we must reassess not only Michael Jackson but ourselves and how we treat celebrity and transgression. What is the role of the media in enabling this behavior, of parents in turning a blind eye to abuse? And is there collateral damage when we seek to protect our cultural idols from accusations of wrongdoing?

It is possible to love Michael Jackson’s music and to consider the evidence that he was a rank pedophile.

In fact, there is an imperative to do just that.