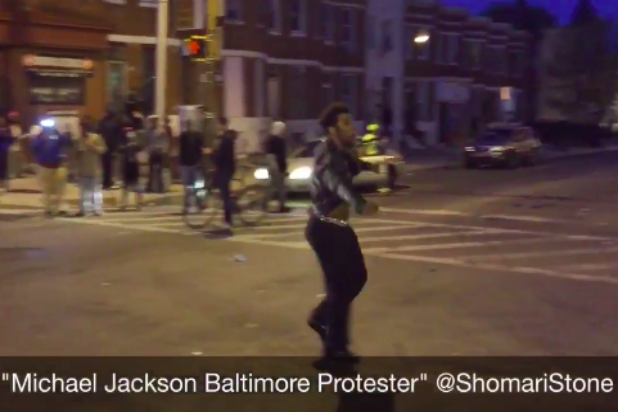 While rioters caused chaos in Baltimore on Monday night during protests over the death of Freddie Gray, a Michael Jackson impersonator decided to put on an impromptu show for the crowds.

Dressed in a black leather jacket and dark pants, the unidentified man strutted into the streets and flawlessly copied Jackson’s moves from the 1983 “Beat It”  music video.

The impersonator paid no attention to the rioters around him as he gyrated shirtless in front of police officers in riot gear, telling them to “just beat it.”

It was a fitting backdrop for the reenactment of the blockbuster music video, which revolves around a gang fight at a diner and a pool hall, while Jackson lies in bed contemplating the senseless violence — before heading out to break it up.

The latest round of violence in Baltimore broke out following Gray’s funeral on Monday afternoon. The 25-year-old African-American was picked up by officers on Sunday, April 12.

The Baltimore Police Department has not officially disclosed why he was taken into custody, though it said he fled after officers made eye contact with him. Footage recorded by bystanders appeared to show Gray shouting in pain as he was apprehended. He slipped into a coma on April 16 and died three days later. His arrest and death sparked protests and accusations of police brutality.