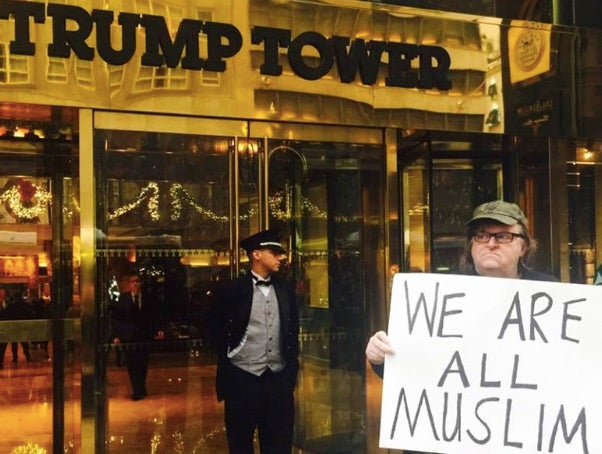 Michael Moore won’t be invited to the Trump Tower holiday party this year.

The rabble-rousing filmmaker stood in front of Trump Tower on Wednesday holding a sign that read, “We are all Muslim” until police removed him.

Moore then wrote a letter to Trump on Facebook, revealing their history while calling for others to hold up signs showing support for Muslims.

According to Moore, he and Trump were about to go on a talk show together in 1998 when a producer pulled Moore aside to relay Trump’s nervousness.

“She said you didn’t want to be ‘ripped apart’ and you wanted to be reassured I wouldn’t ‘go after you,'” Moore wrote.

Also Read: Michael Moore's 'Where to Invade Next' Loses Appeal of R Rating

Moore then went up to Trump to squash the Donald’s worry.

“The producer says you’re worried I might say or do something to you during the show. Hey, no offense, but I barely know who you are. I’m from Michigan. Please don’t worry — we’re gonna get along just fine!”

You seemed relieved, then leaned in and said to me, “I just didn’t want any trouble out there and I just wanted to make sure that, you know, you and I got along. That you weren’t going to pick on me for something ridiculous.”

Moore wrote that it’s fortunate the country’s majority is no longer composed of his “angry white guys.”

“So, in desperation and insanity, you call for a ban on all Muslims entering this country,” he continued.

“I was raised to believe that we are all each other’s brother and sister, regardless of race, creed or color. That means if you want to ban Muslims, you are first going to have to ban me. And everyone else. We are all Muslim.”