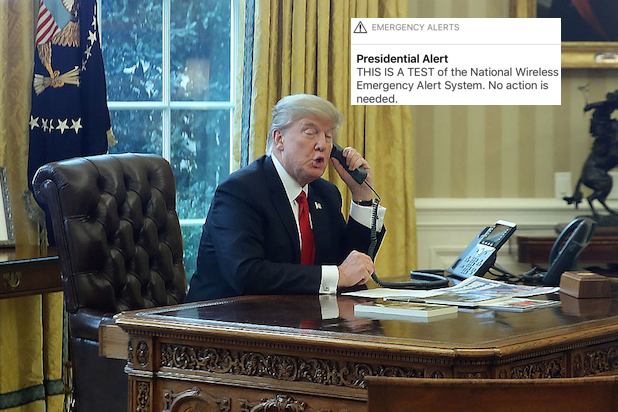 That went about as well as you’d expect.

Moments after President Trump sent out his test “presidential alert” notification to nearly all U.S. cellphones on Wednesday, he was met with a swift thanks but no thanks from thousands of Twitter critics.

The alert was followed by a brief text: “THIS IS A TEST of the National Wireless Emergency Alert System. No action is needed.”

Also Read: Trump to ABC's Cecilia Vega: 'I Know You're Not Thinking. You Never Do'

The test is meant to be similar to a national Amber Alert in case of a catastrophe — with plans for the test going as far back as the George W. Bush White House when the president called for a national warning system after the U.S. government was criticized for its response to Hurricane Katrina.

But to some of the president’s most vocal critics, it’s an ominous sign Trump can create a “state of emergency,” as “11/9” filmmaker Michael Moore tweeted.

“It was just a test. But make no mistake about it. This is the world in which we now live.”
That’s my final line in “Fahrenheit 11/9”. A few minutes ago, Trump gave us a preview of the state of emergency he is creating to justify the end of democracy as we know it. RESIST! pic.twitter.com/M8g3NebFQ2

David Hogg tweeted, then deleted that “just wait until Trump comes out with an off switch for all news outlets because ‘fake news’ it’s [sic] to national security.” He then added: “Y’all ever read 1984?”

For others, though, it was another opportunity to mock the president. Jimmy Kimmel shared a joke “alert” he received, warning of a “WITCH HUNT, CROOKED HILLARY, NO COLLUSION, CONFIRM KAVANAUGH, #MAGA.”

Did anyone else get this? #PresidentialAlert pic.twitter.com/BXiuLoVgGj

I’m actually surprised Trump’s alert was so bland. I expected, “Sorry to the haters but this is the most beautiful, tremendous emergency alert of all time. A lot of people are saying so. It’s a message of love.”

Oh my. A “Presidential Alert” emergency. I thought that was the entire Trump presidency. pic.twitter.com/DNX0xVLENo

There were plenty of jokes to swift through soon after the alert went out. “Eh I’ve had seen more disruptive presidential alerts on my phone,” New York Times writer Nate Cohn tweeted.

Can confirm the system works

hrmm, this seems to be broken. no way for me to respond "go fuck yourself"

And there it is. Thank you, Mister President. Good to know you can barge into my phone at any time.

i feel i got a different text than everyone pic.twitter.com/38XOTbI65v

You get the idea, but there was at least one pro-Trump tweet in response to the alert from Diamond and Silk.