Michael Stanley, the rock musician known to scores of Cleveland fans who listened to him every day for 30 years on WNCX during their afternoon commute, died in his sleep Friday after losing his battle with lung cancer. He was 72.

Stanley had written a statement in anticipation of his passing, which WNCX posted. It reads: “Hey gang… Well, if you’re reading this then I am off to catch up with that big club tour in the sky. But before the bus pulls out I wanted to thank all of you for being part of my musical journey, both on the stage, on record, and behind the microphone here at WNCX.”

It went on: “Somebody once said that if you love your job then it’s not really work. And if that’s true (and I definitely think it is) then I have been happily out of work for over fifty years!”

Born Michael Stanley Gee, the Cleveland native cut his first solo album at 25 while working as a manager for a record store chain and shortly thereafter formed The Michael Stanley Band, which was dubbed MSB by fans. The band’s heartland rock style quickly became a hit in local venues, reaching an all-time high in total attendance of 74,404 during a four-night stand at Ohio’s Blossom Music Center.

After the band broke up in 1987, Stanley continued to record and tour while remaining in his hometown. Three years later, Stanley joined the family at WNCX radio, becoming an on-air personality and disc jockey, where he had remained for three decades.

Michael Stanley is survived by his wife, Ilsa, his two daughters and five grandchildren. 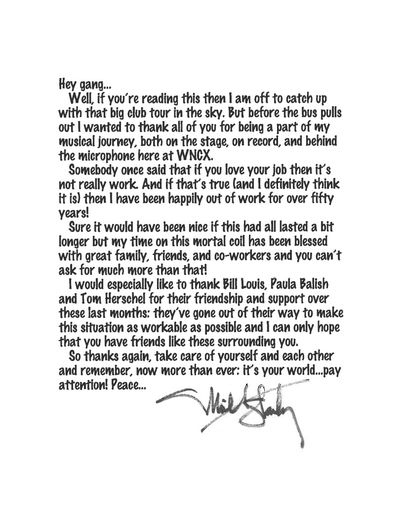