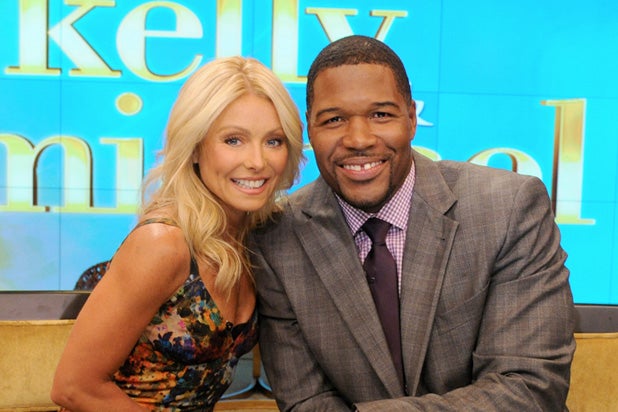 Michel Strahan’s last day on “Live with Kelly and Michael” will be Friday, May 13 and he will appear on “Good Morning America” part time over the summer before joining the cast on a full-time basis in September.

We reported yesterday that fans of the cohosts may want to savor their remaining days together, as buzz on the “Live” set is that Strahan’s exit, initially timed for sometime this summer, could happen earlier to take advantage of “sweeps.”

A “Live!” spokesperson issued the following statement: After meeting with the producers of both “Live” and “Good Morning America,” and after speaking with Kelly and Michael, we have decided on a plan that best advantages both shows for the future. To that end, Michael’s last day on “Live” will be on Friday, May 13, which not only gives the show the chance to have a nice send-off for him during the May book, but to also immediately begin the on-air search for a new co-host. This plan also allows GMA to start integrating Michael into the show more often this summer before his full-time start in September.

Various guests hosts are expected to fill in for Strahan until ABC decides on a permanent co-host. Back when Regis Philbin retired as Ripa’s co-host in 2011, it took 10 months before the network settled on Strahan as a permanent replacement. The rotating guest hosts will essentially be trying out for the gig.

Josh Groban and Seth Meyers were reportedly finalists before Strahan got the job the last time around — though Meyers has since landed his own late-night show on NBC.

Three top ABC execs and Strahan himself have apologized to Ripa, who returned to “Live!” on Tuesday after a four-episode hiatus, walking out hand-in-hand with her departing co-host before addressing the audience.

“Our long national nightmare is over,” Ripa joked after receiving a standing ovation from the studio audience. “I’m going to be completely honest, I’m fairly certain that there are trained professional snipers with tranquilizer darts in case I drift too far off message. I first want to honestly, sincerely thank you for welcoming me back to the show.”

Ripa skipped the show following the fallout from last week’s decision to move co-host Strahan to “Good Morning America.” She was widely reported to be furious with the way the situation was handled by executives at ABC, where she has worked both on the soap “All My Children” and “Live.”

Ripa went on to say that the show of support has been “overwhelming.”

“I needed a couple of days to gather my thoughts. After 26 years with this company I earned the right,” Ripa said before joking that members of the studio audience probably called in sick to attend the show.

As for Strahan, he’s known to be extremely popular among “GMA” staffers and ABC execs hope he will widen the ratings gap with rivals “Today” and “CBS This Morning.”