The Facebook page for Bret Michaels, who has been hospitalized since last week with bleeding on his brain, was updated Wednesday afternoon with hopeful news. 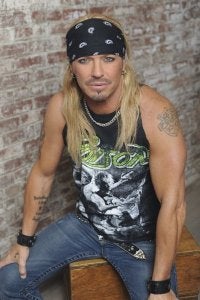 Michaels "is responding well to tests and treatments," the post says.

Also, assuming no further setbacks, he plans to resume touring on May 26.

We thank you all for your continued support and outpouring of well wishes for Bret.

While additional studies are planned throughout the week, to hopefully detect the exact cause of the rupture, Bret will remain monitored closely by his medical team to make sure no further complications occur. He is responding well to tests and treatments. Even though yesterday was a minor setback, Doctors remain hopeful for a full recovery and plan to release more specific information next Monday.

While Bret is recovering we obviously have some shows that are being rescheduled. We are working to reschedule dates from now until May 21st.

At this time we are planning to resume the tour May 26th in Ft. Smith Arkansas provided there are no further complications or setbacks. We will then continue with all scheduled dates throughout the summer and fall, including the June and July tour with Lynyrd Skynyrd. Look for additional information in the days and weeks to come. For those of you with tickets for shows that are being rescheduled, your tickets will be honored on the new dates. Tickets remain on sale for the shows which are being rescheduled although the new dates have yet to be announced.