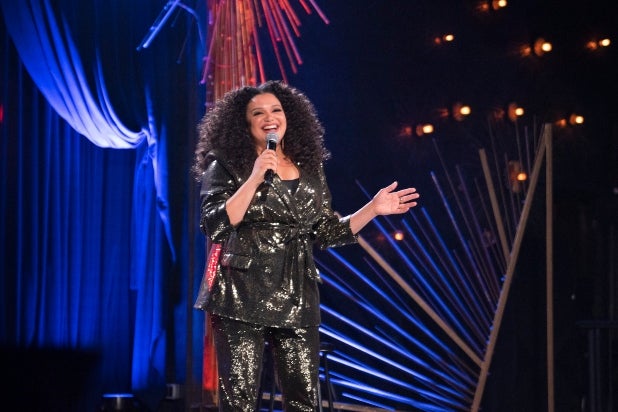 Michelle Buteau, host of Netflix reality competition series “The Circle” and an actress known for “Always Be My Maybe” and “Tales of the City,” has landed an hourlong comedy special on Netflix.

Called “Michelle Buteau: Welcome to Buteaupia,” the special will be produced by comedian Wanda Sykes and is set to premiere on September 29.

Here is the synopsis from Netflix:

“Michelle Buteau, the scene-stealing queen of Netflix, delivers the night out we all need right now in her uproariously funny new special ‘Michelle Buteau: Welcome to Buteaupia.’ Letting loose with a goblet of frosé in hand, she delivers a dynamic hour of comedy that delves into parenthood, cultural difference, and the overlooked value of short men. Her refreshingly honest approach reminds us to appreciate government workers named Otis and, most importantly, that character counts.”

The special will also be produced by Page Hurwitz along with Sykes for Push It Productions. Hurwitz also directs.

Buteau has had a career in acting that spans back to the early 2000s. Some of her television roles have included an episode of “Key and Peele,” “The Jim Gaffigan Show,” “Criminal Minds,” “Broad City,” “The Eric Andre Show,” “Russian Doll,” “High Maintenance,” and “Awkwafina is Nora From Queens,” as well as recurring roles in Adult Swim’s “China, IL,” Fox’s “Enlisted,” Netflix’s “Tales of the City” reboot, BET+’s “First Wives Club,” and Fox’s “Bless the Harts.” She was also in the 2019 film “Isn’t It Romantic” starring Rebel Wilson.

She’s also set to return as host of “The Circle,” which was renewed for a second and third season.