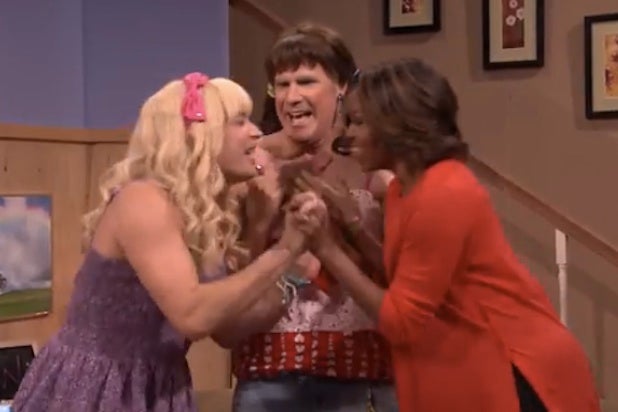 Michelle Obama joined Jimmy Fallon and Will Ferrell on Thursday’s “Tonight Show” in a special appearance of “Ew!” — a skit from his former late night show about a spunky teen, Sara, who is the host of a TeenNick show. Ferrell was in tow as Sara’s effervescent Harry Styles-loving friend Stacy Wallace.

Sara was so nervous around the First Lady, she called for a “shy faceoff.”

Obama gave Sara permission to call her Michelle, which made her go verklempt. She excitedly asked the FLOTUS about the Winter Olympics.

Also read: Brian Williams Raps the News on Fallon’s ‘Tonight Show’ – And The Guest Rapper Will Blow Your Mind (Video)

“I love seeing the athletes in the world compete against each other,” she said. “One of my favorites is figure skating!”

“Wow, Michelle! You’re pretty strong,” Sara exclaimed. “You could totally be in the Olympics!”

Watch the FLOTUS and Fallon’s sketch below via NBC: