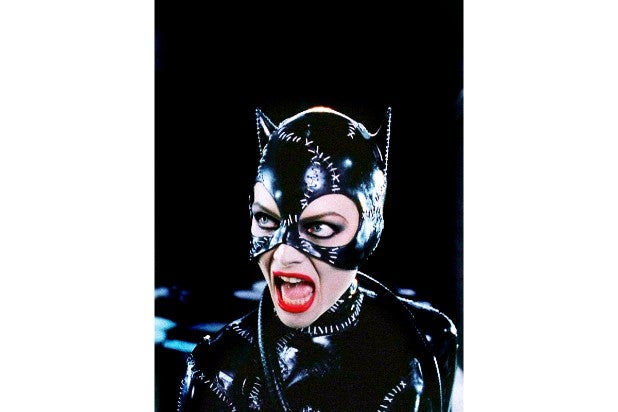 Warner Bros.
A quarter century ago, Tim Burton and Michael Keaton reunited to bring forth "Batman Returns," a sequel to their 1989 hit that remains one of the most unsettling Batman tales ever put to screen. That is thanks in large part to Michelle Pfeiffer's stunning performance as Selina Kyle, who is twisted by tragedy into the dangerous, seductive Catwoman. To celebrate the film's 25th anniversary, click through for facts you might not have known about her iconic role. 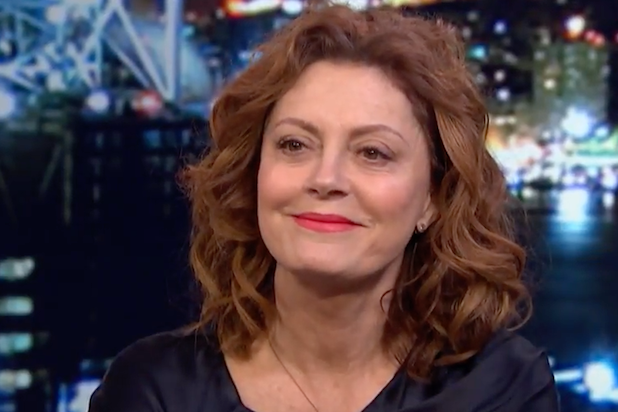 Pfeiffer almost didn't appear in "Batman Returns." She had been attached to star in George Miller's "Lorenzo's Oil" that year and was replaced by Susan Sarandon, who ironically had been interested in playing Catwoman. Sarandon went on to earn her third Oscar nomination for her work in that film. 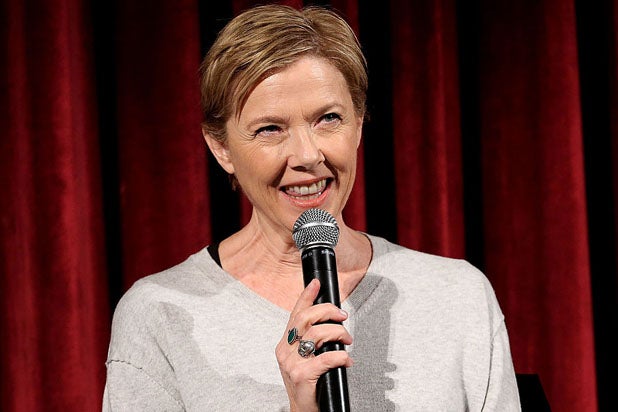 Pfeiffer was also a backup to Annette Bening, who had to drop out of "Batman Returns" after she became pregnant. 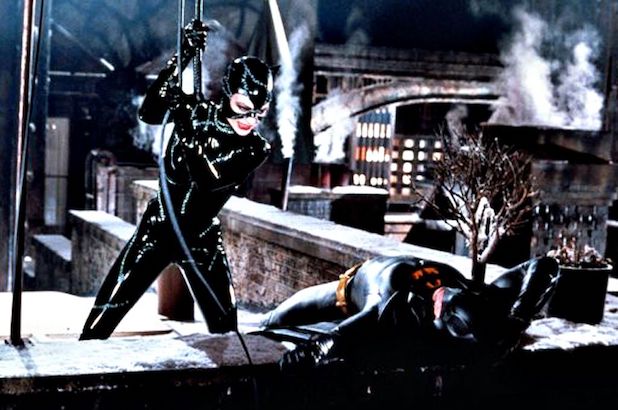 Warner Bros.
"I was halfway through the script when I said yes," Pfeiffer told Empire Magazine. "Someone else was cast in the part and I remember being absolutely devastated and calling my agent and saying, 'How have I not had a meeting about this? Why have I not heard about it?'" 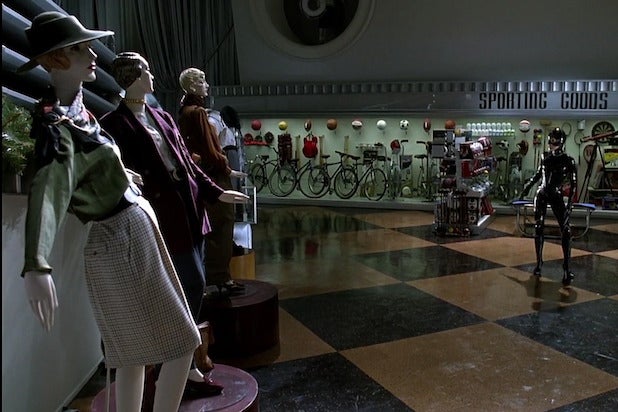 Warner Bros.
Pfeiffer did all of Catwoman's whip stunts herself, including the mannequin scene, which was filmed in one take. "She was better than her stunt people," Burton told Rolling Stone. "She made the whip beautiful, kind of an art form." 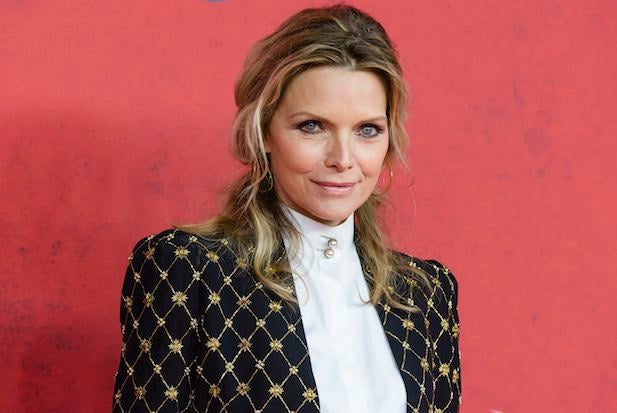 In the Rolling Stone interview, Pfeiffer said she also had to undergo several months of yoga, gymnastics, and kickboxing training to prepare for all the stunts in the film. 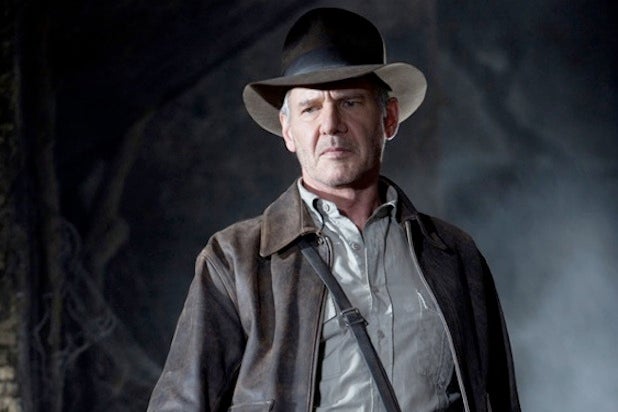 Pfeiffer was trained to use the whip by Anthony De Longis, who also trained Harrison Ford for "Indiana Jones and the Kingdom of the Crystal Skull." 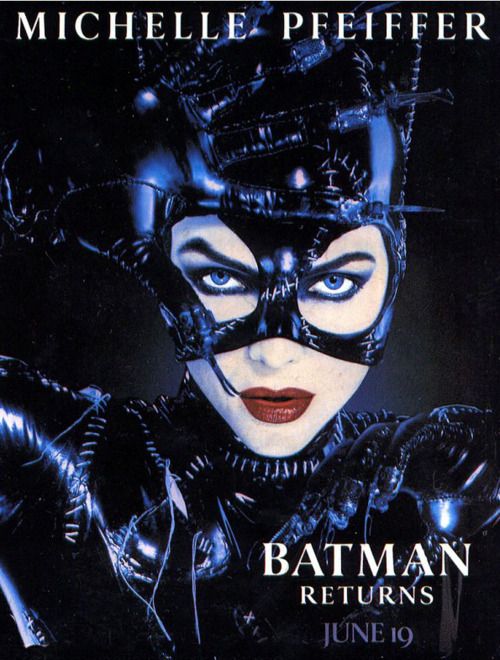 Warner Bros.
Posters featuring Catwoman became so popular that Warner Bros. had to send out additional posters to cities where they had been stolen from bus stops, according to Tim Hanley's book "Many Lives of Catwoman." 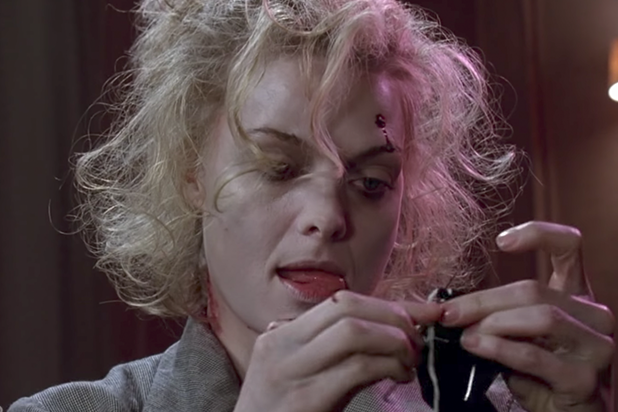 Warner Bros.
There was a good reason the iconic catsuit -- which Pfeiffer notably sews together while wreaking havoc on her apartment -- got those stitches, Costume designer Mary Vogt explained in 2012 to AnOther. The stitches were director Tim Burton's idea. "He had this vision of the calico cat -- with its stitches starting to come apart," she said. "So we sculpted stitches in cast and glued them on. It looked terrible!" To make it look better, Vogt and her team brushed Pfeiffer in a thick silicon liquid. 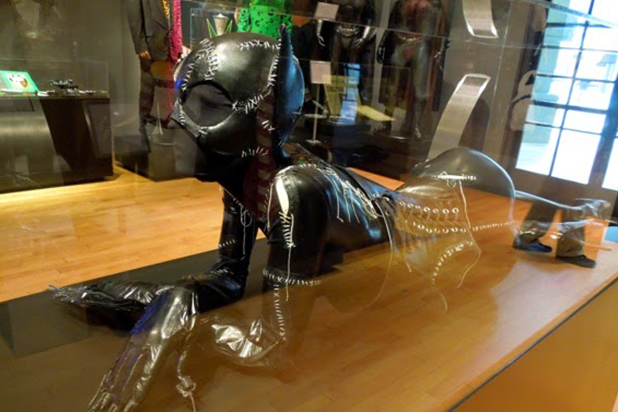 Warner Bros.
To make the suit, Vogt explained that to get the ultra-skin-tight look they wanted for the movie, they had to make a body cast of Pfeiffer. "We made a body cast of her, and the costume was made on the body cast. We were afraid that it would rip, because she had these cat claws, and because it’s latex, once it ripped it’s over, you can’t repair it. So we had to make about 40 cat-suits, but actually it never ripped, it was very strong," she told AnOther mag. 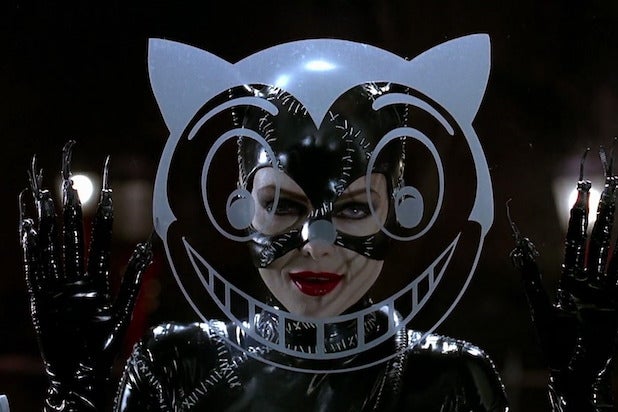 Warner Bros.
With a costume that tight, and made of latex, no less, the costume team had to douse Pfeiffer in baby powder in order to get it on. "Because you can see everything – and the latex makes it look very fluid, and Michelle just has a beautiful, fluid way of working -- she’s very athletic, so she gave it a modern look. It was difficult to wear," Vogt said in the aforementioned 2012 interview. 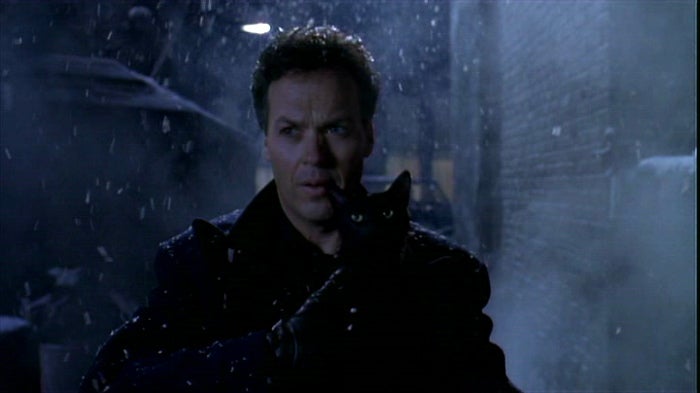 Warner Bros.
Selina's pet cat, Miss Kitty, has had many names over the years. In the 1966 Batman film, she was known as Hecate. In "Batman: The Animated Series," she was called Isis, and in Halle Berry's "Catwoman," she was called Midnight. 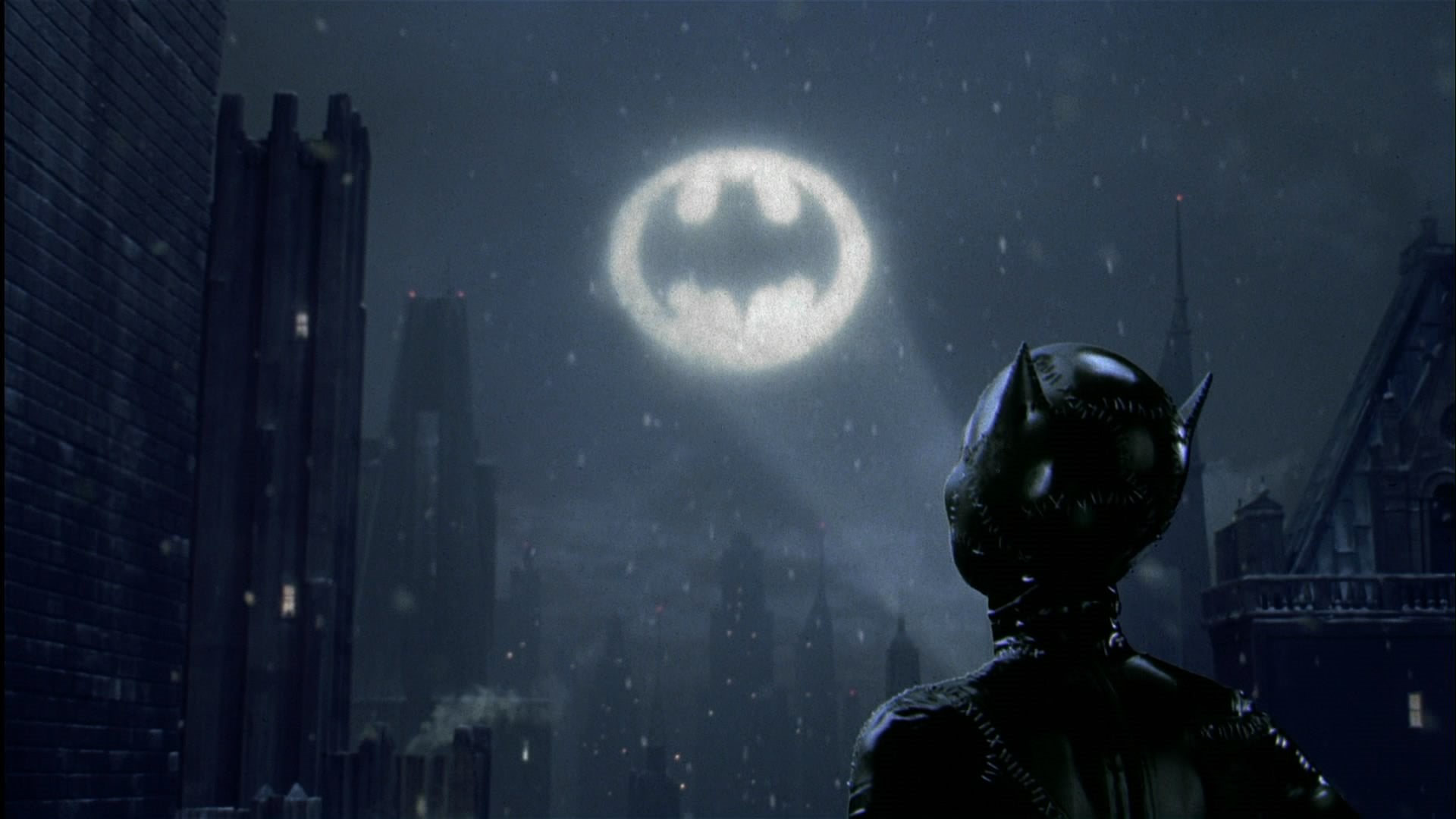 Warner Bros.
The final shot of the film, in which Catwoman is shown to have survived her fight with The Penguin and Max Schreck and gazes at the Bat-Signal, was done without Pfeiffer. According to the making-of documentary "Shadows of the Bat," the shot cost $250,000 and was done weeks before the film's release to tease a sequel or spin-off featuring Catwoman. 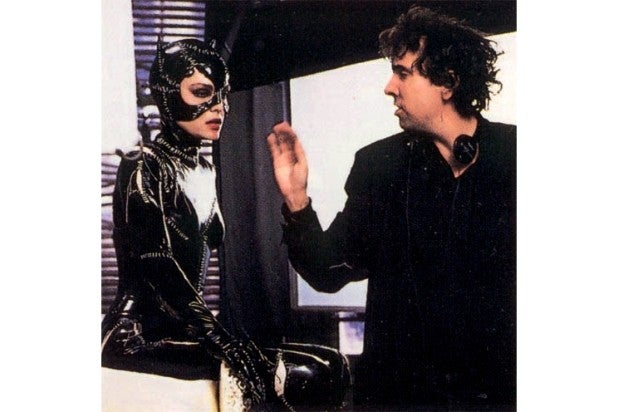 Warner Bros.
Indeed, Burton (pictured right) said in the documentary that he began coming up with ideas for a third Batman film in which Catwoman would return to help Batman fight the Riddler and Two-Face, but Warner Bros., who wanted a different tone, put Joel Schumacher in charge of the threequel that would become "Batman Forever." Burton was attached as a producer on that film, but is said to have had no creative input. 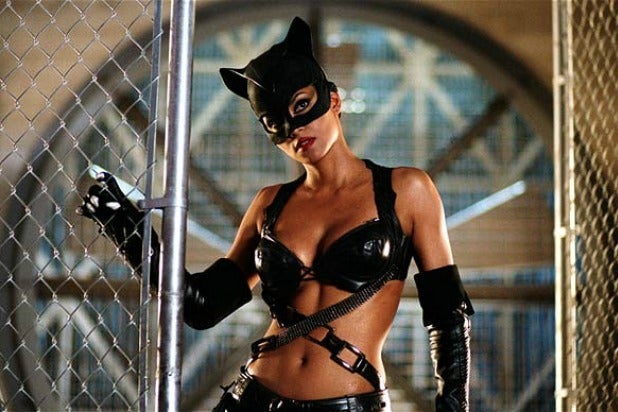 Warner Bros.
Burton also started developing a Catwoman spin-off film featuring Pfeiffer, which is why Catwoman did not appear in Schumacher's "Batman Forever." But again, Burton's plans fell by the wayside as the film got stuck in development. The spin-off eventually left Burton's hands and became the 2004 "Catwoman" film with Halle Berry, which was universally panned. 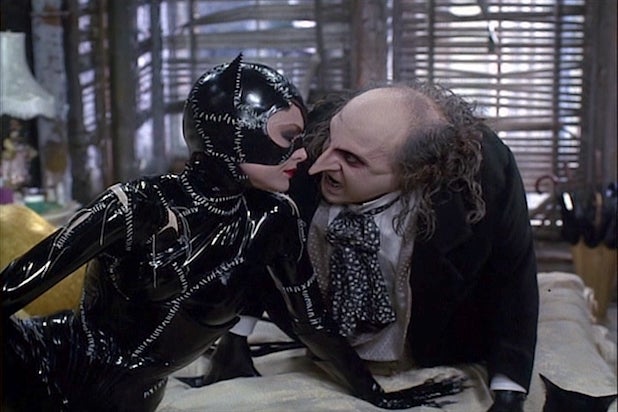 Upon the film's release, many critics praised Pfeiffer for turning Catwoman into a foil for Batman, with both characters dealing with trauma. "Our rooting interest is not for any macho act by Batman to save the city but for each character to achive some sort of emotional peace," said critic Gene Siskel. That makes for a strange but refreshing action story. 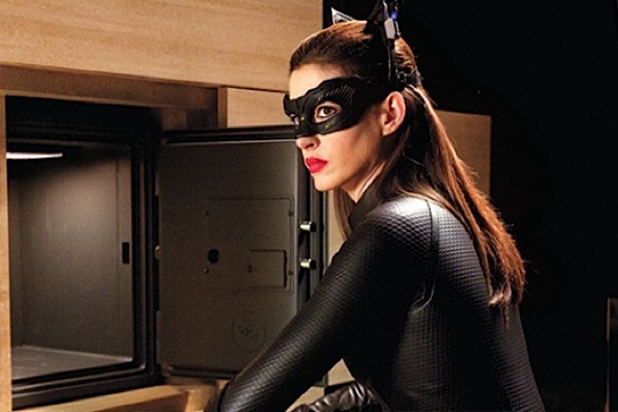 Warner Bros.
Christopher Nolan's 2012 "The Dark Knight Rises" featured Anne Hathaway as Selina Kyle. Pfeiffer was excited about seeing Hathaway portray Catwoman, as she told Empire Magazine that year: "Oh, I think she’s great. I’m actually very much looking forward to seeing her in the role. I’m a big fan of hers and I think she has everything you need for that role. She has the humor, she can go to dark places, she’s obviously very talented. I think she’s going to be really good," she said. 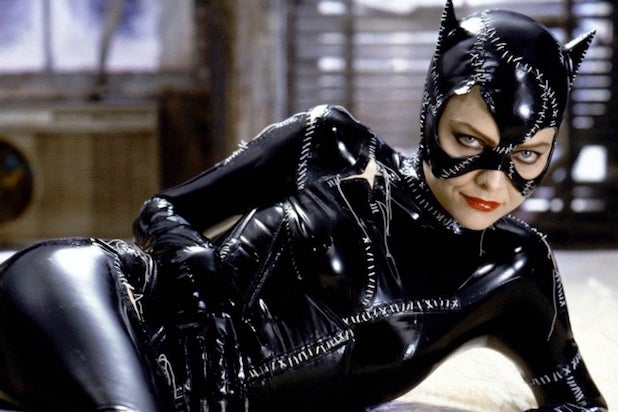 Warner Bros.
Pfeiffer is definitely a standout among the actresses who have played Catwoman. In fact, director Tim Burton even said that her performance in "Batman Returns" might be his favorite role. "I don’t really go back and look at the movies but her performance in that was one of my favorite performances of anything by anyone in any movie that I’ve worked on," he told the Los Angeles Times. "It was just the best. Really, I’ll never forget her in that."   Ashley Boucher contributed to this report.
x
Looks like you're enjoying reading