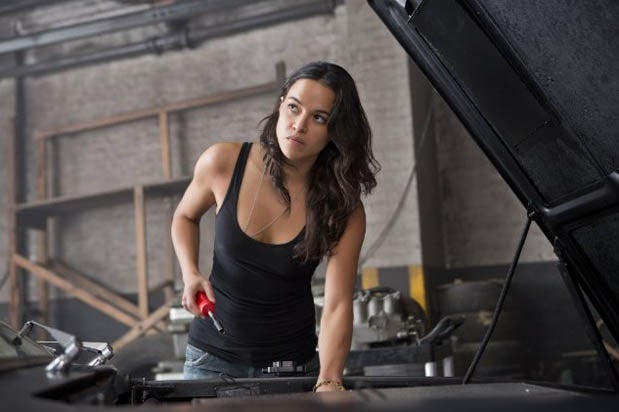 Hours after “The Fast and the Furious” actress slammed Hollywood for casting actors of color in roles originally conceived as white, she issued an apology.

“I stuck my foot in my mouth once again,” Rodriguez said in a video posted on her Facebook page. “I have a tendency to speak without a filter, sorry about that.”

Also Read: Michael B. Jordan on ‘Fantastic Four’ Racist Backlash: ‘It Was Expected’

The controversy started Saturday morning when TMZ posted a video showing a photographer asking Rodriguez about reports she was being considered to play the Green Lantern.

“That’s the dumbest thing I’ve ever heard,” Rodriguez responded about taking on the character, who was a white man in the DC Comics universe.

Rodriguez went on to say, “I think it’s so stupid… because of this whole, like, ‘minorities in Hollywood’ thing… it’s so stupid, it’s like, stop stealing all the white people’s superheroes. Make up your own, you know what I’m saying? What’s up with that?”

The Latina star immediately came under fire from fans on social media, leading her to address the backlash later in the day.

After claiming on Facebook that her comments “got taken out of context” and acknowledging that “a lot of people got offended or whatever,” the star explained what she had intended to say.

“What I really meant was that ultimately at the end of the day, there’s a language and the language that you speak in Hollywood is ‘successful franchise,’” she said.

“I think that there are many cultures in Hollywood that are not white that can come up with their own mythology. We all get it from the same reservoir of life, the fountain of life. It doesn’t matter what culture you come from. I’m just saying, instead of trying to turn a girl character into a guy or instead of turning a white character into a black character or Latin character, I think that people should stop being lazy and people should actually make an effort to develop their own mythology.”