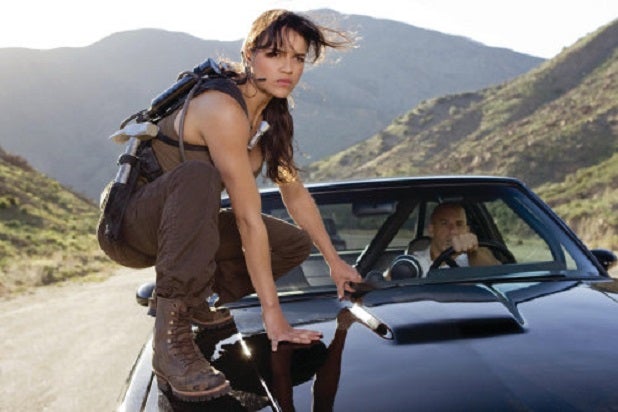 Actress Michelle Rodriguez may be walking away from the film franchise that has kept her gainfully employed for over a decade: the “Fast and the Furious” and its seven sequels.

To mark the home entertainment release of Universal’s latest in the billion-dollar series — “The Fate of the Furious ” — Rodriguez posted an ominous message to her Instagram account on Monday.

“F8 is out digitally today, I hope they decide to show some love to the women of the franchise on the next one. Or I just might have to say goodbye to a loved franchise.” Rodriguez wrote.

“It’s been a good ride & Im grateful for the opportunity the fans & studio have provided over the years,” she concluded.

Reps for Universal and Rodriguez did not immediately respond to TheWrap’s request for comment. While no cast is confirmed, two more films in the series led by Vin Diesel are in active development, which would round out the “Fast” constellation to ten total movies.

Rodriguez did not elaborate on what was lacking when it came to female parts in “Fate of the Furious” or its cousins, but she and stars like Elsa Pataky and Nathalie Emmanuel had significantly smaller parts compared to their male costars like Dwayne Johnson, Jason Statham and Tyrese Gibson.

On the other hand,  Charlize Theron played the antagonist and was vital to the plot — something many underrepresented groups count as most important when they are portrayed on screen.

Would you be sad to see Rodriguez go? Let us know in comments.