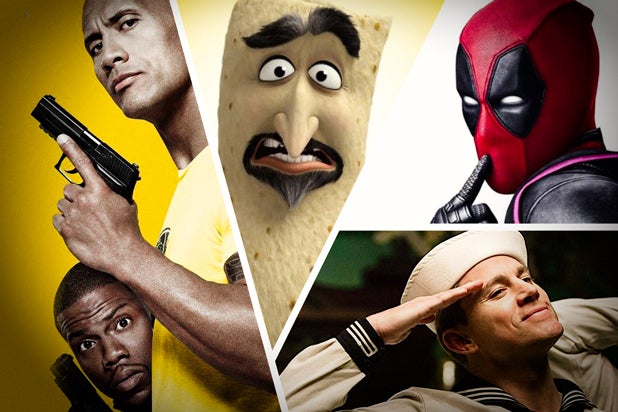 Despite the historic Best Picture Oscar win for “Moonlight” this year, the annual survey contains worse news for queer people of color. Inclusion of nonwhite characters in mainstream movies is down 5.5 percent from 2015, which fell over seven percent the year prior.

The six major studios and one mini-major were analyzed and issued grades by GLAAD, with the most positive portrayals going to Universal Pictures.

That’s no prize, considering the studio’s content earned the label “insufficient;” 20th Century Fox, Paramount and Warner Bros. were labelled as “poor;” Disney, Lionsgate and Sony Pictures were slapped with a “failing” grade.

All the companies involved declined to comment on the matter except for Disney, which did not return requests for comment.

“We continue to see many of the same problems repeatedly,” GLAAD President and CEO Sarah Kate Ellis said of the survey released on Thursday. “This includes LGBTQ characters who lack substance and are often treated only as a punchline, a dangerous message which keeps old prejudices alive both here in the U.S. and around the world.”

The study noted the studios “continue to lag behind the groundbreaking stories we see in independent film.”

The troubling stats indicate only only 18.4 percent of 125 wide releases contained roles identified as lesbian, gay, bisexual, transgender or queer last year. It’s up just one percent from 2015.  Of those characters, gay men were most visible by a margin of 83 percent of films. Lesbian characters got a 12 percent boost to bring the 2016 tally to 35 percent inclusion.

There’s also been an uptick in the visibility of bisexuals (13 percent) though their portrayal in films like the widely panned “Zoolander 2” did not thrill the group. That film contained the only gender non-binary character to hit cineplexes in 2016, played by Benedict Cumberbatch, which escalated into a public relations nightmare and eventually led to a petition to boycott the film.

Seventy LGBTQ characters were counted last year in total. While 48 were white, only nine were black, four were Asian/Pacific Islander and one character was Latinx. 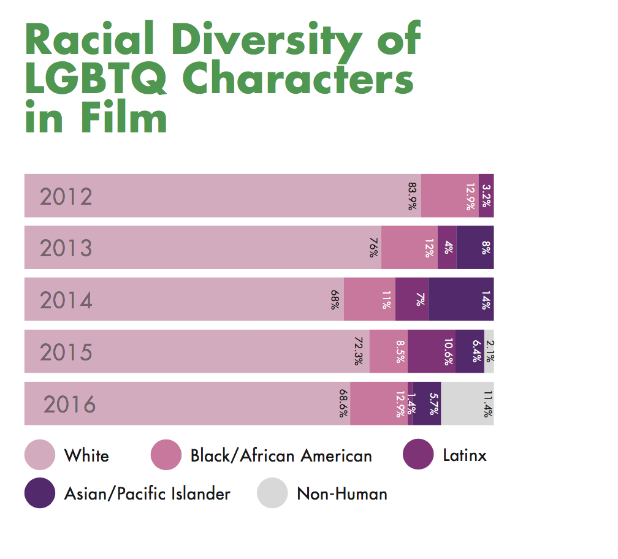 “Many of these characters were isolated tokens burdened with representing multiple communities through the views of one person — often limited to less than five minutes of screen time,” the study said.

Eight roles were animated in titles like Sony’s “Sausage Party” and Disney’s “Zootopia.” Not one documentary was considered inclusive (a sect of filmmaking largely perceived as progressive in content and diverse hiring practices).

In its formal observations the SRI came down hard on comedies, decrying the failure of making Ryan Reynolds’ superhero Deadpool pansexual despite the film’s director promising it would be addressed, or the damaging stereotypes of the animated raunch-fest “Sausage Party.

Criticism came for films like Sacha Baron Cohen’s “The Brothers Grimsby” and repeat offender Kevin Hart‘s  “Ride Along 2” for containing “offensive humor based in an idea that two men touching each other is inherently strange.”

That’s nothing compared to the SRI’s assessment of Robert De Niro and Zac Efron’s “Dirty Grandpa” and Hart and Dwayne Johnson’s “Central Intelligence.”

The report found these titles “two of the most egregious offenders” for their “out-and-out defamatory portrayals of LGBTQ people.” Low-brow buddy comedies like these tend to run rampant with “gay panic” — which you can read about here.

There’s room for improvement all around. Sony in particular has a strong upcoming slate of LGBTQ content, with Scarlett Johansson’s “Rough Night” opening June 16 and SPC releasing their steamy Sundance acquisition “Call Me By Your Name” with Armie Hammer this November. The studio is also headed into production on a “Girl With the Dragon Tattoo” sequel, with Claire Foy in talks to play queer icon Lisbeth Salander.

Ellis concluded that the industry “must do better to question what they are really communicating to audiences.”

“GLAAD will continue to hold Hollywood accountable for who they are — or are not — representing,” she said.