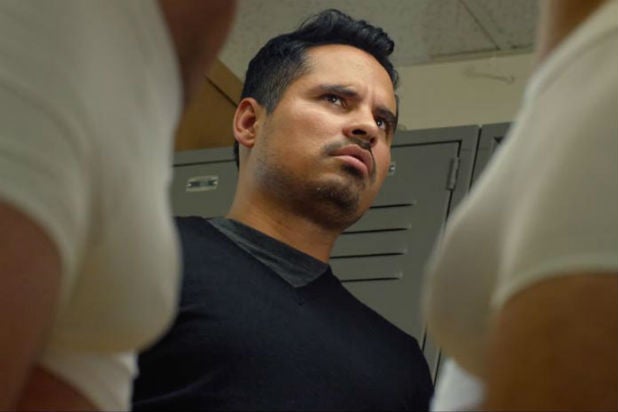 Warner Bros.’ reboot of the TV series “CHiPs” is the latest mainstream Hollywood film roiling with “gay panic,” or scenes where straight characters are distressed by social or sexual situations involving LGBTQ people.

The buddy comedy — set amid the culture of a Southern California police force — seems to endlessly dredge up scenarios where men are confronted with the naked bodies, perceived masculinity and potential desire for other men.

In their first meeting, Ponch is confronted with a glory shot of Baker’s bulge in tighty whities in the police locker room, where other bros engage in bare-chested hugs and the camera watches the many bulges bounce off each another as Ponch’s face twists in horror.

In another convoluted scene, Baker — looking severely banged-up thanks to his former job — has problems moving his joints when it rains outside, so Ponch must come help him into a warm bath. Ponch winds up face-planting in Baker’s crotch — a fate worse than death, apparently, for a character paralyzed on the spot when he sees women in yoga pants on the street.

This not to say that Shepard, who wrote and directed the feature film adaptation, means the LGBT community harm in his comedic approach — the script includes some intere conversations about men and sexuality, though none remove the  of cheap laughs at the expense of homosexuals.

Take that first locker-room meeting scene — Baker tells Ponch he’s coming across as homophobic for displaying a lack of affection.

“Me not wanting to hug a naked male stranger is homophobic?” Ponch asks.

It’s a much more thoughtful response than you’d expect from an action comedy geared at a young male audience — and later on, Ponch explains that his behavior isn’t homophobic because Baker is straight.

Then there’s the use of gay characters who organically exist in Shepard’s story. The film opens with the revelation that a dirty cop and an armored car driver, both African-American men, have secretly been living as a couple.

This revelation barley registers in the tightly-knit police force, and is never mentioned again despite the fact that this gay couple’s criminal activity ripples through the entire plot.

There’s another gay cop on the force, who introduces himself as “Gay Terry” when the group is getting to know Ponch. He’s a terrible cop, who brings a fire extinguisher as a weapon when pulling over a speeding driver and spends the remainder of the film on crutches after a grueling shoot-out. He’s also pridefully promiscuous, telling female officers he’d happily sleep with either Baker or Ponch as he objectifies the men in their tight uniforms.

It’s precisely these kinds of one-dimensional, or outright exploitative, portraits of gay characters that has groups like GLAAD coming down hard on the big studios.

Also Read: 'Beauty and the Beast' to Open in Malaysia With 'Gay Moment' Intact

In GLAAD’s 2015 Studio Responsibility Index, the watchdog group found only 17.5 percent of wide releases to be inclusive to the LGBT community.

“Leaving LGBT people out of the picture — or including them only as a punchline — keeps old prejudices alive and creates an unsafe environment, not only here in America, but around the world,” GLAAD President Sarah Kate Ellis said of films like Sony’s “Wedding Ringer” and “Get Hard” (another Warner Bros. release, which the group called a “nearly two-hour prison rape joke”).

GLAAD has not yet released its study of 2016 films.