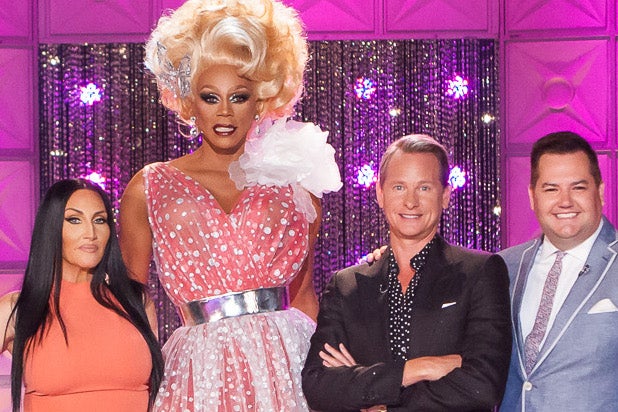 Michelle Visage (left) poses with the rest of the "RuPaul's Drag Race" judges during Season 8.

Over the course of 10 seasons of television — eight regular seasons and two “All-Star” mini-seasons — “RuPaul’s Drag Race” has cemented its place as a show not just for the LGBT community, but for mainstream viewers as well.

Longtime judge Michelle Visage has been by RuPaul’s side since Season 3, and feels connected to the “Drag Race” brand. In a phone interview with TheWrap, she described the show as being like her child.

“It’s been pretty amazing to watch grow from birth,” said Visage, who has two (real-life) teenage daughters of her own.

“When you go into a show you pray its successful, but you just don’t know whats going to happen … I knew straight away it was going to be special.”

No where is this clearer than a recent dramatic change. For the first time, “Drag Race” will be airing its entire season on VH1 instead of its home at Logo. Both networks are owned by Viacom, so the show isn’t moving far, but the change is practical and also spiritual.

Visage says the show producers hope the network switch will increase its audience. By moving to a more widely-known network than Logo, it opens “Drag Race” up to new viewers who might not have access to Logo or can’t find it on their TV schedule.

To have access to more demographics and new viewers is a natural culmination of the show’s success. The show earned its third Emmy nomination in 2016, with host RuPaul Charles winning his first for “Outstanding Host for a Reality or Reality-Competition Program.” The Season 7 premiere, at the time, earned the show a nearly-20 percent increase in the advertiser-coveted 18-49 demographic.

“Its going to grow the demographic even further,” Visage said. “It’s the perfect opportunity to introduce the show to a whole new audience. It increases the viewership, it increases the love of the craft, how these kids struggle to get to where they are… [it just] makes it grow even further.”

“Drag Race” began as a small reality competition show on Logo in 2009. It had nine contestants, a small budget, a number of prizes including $20,000, and what’s become known in the community as a blurry “vaseline lens.” It was immediately a love letter to the art of drag and the adjacent communities.

“We’re still a part of Logo … but we’ve grown so much as a show beyond the scope of the LGBTQ community, who we do still super serve… This is a queer television, honey, and nothing’s going to change,” Visage said.

“Drag Race” is almost more important now thanks to a current political climate that is putting marginalized groups on edge, including the LGBTQ community. Politics was in the back of the producers and judges’ minds, as you can see on the Season 9’s premiere episode. The judges, including Visage, make references to the First Family.

“You could put Donald Trump in that dress, he’s going to look gorgeous,” RuPaul said about one contestant’s look. The rest of the judges immediately respond with an emphatic “NO.”

The current presidency wasn’t at the forefront, according to Visage, since the season was filmed before November’s election, but it’s hard not to think about it when the politics when your country is, as she says, “f—ed right now.”

“Now more than ever it’s more necessary that shows like our show [are] in the spotlight — shows that have a voice, shows that take the sips out of life,” Visage said, naming “Broad City,” “Schitt’s Creek,” and “scripted shows that are irreverent. These are the shows that need to keep being loud and proud.”

“Drag Race” isn’t just an entertaining romp. It actively helps its viewers thanks to its politics and point of view, emphasizing authenticity and being who you are. As RuPaul sings in his song “Born Naked:” “we’re all born naked and the rest is drag.”

A network switch isn’t going to change that.