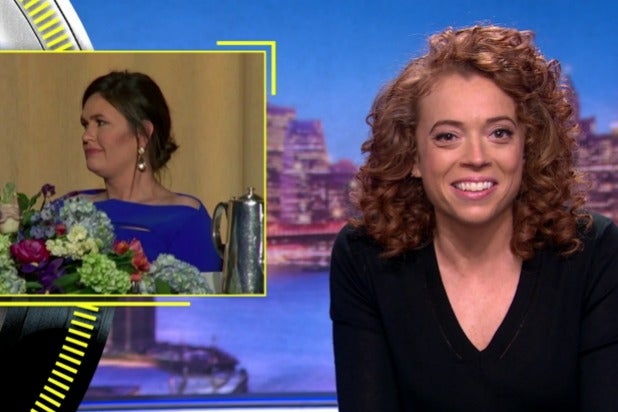 Comedian Michelle Wolf took on critics of the jabs she took at press secretary Sarah Huckabee Sanders during the White House Correspondence Dinner, saying in the debut episode of her Netflix talk show, “The Break,” that the joke was not “looks-based.”

In April, Wolf’s WHCD speech came under fire for its frequently caustic tone. At one point, Wolf likened Sanders to Aunt Lydia, a loathsome character on Hulu’s dystopian drama “The Handmaid’s Tale.” She also joked that Sanders’ “perfect” smokey eye makeup was made from ashes of burnt lies.

Many on both side of the aisle called the cracks “personal,” “cruel” and “deplorable.” But Wolf came to her own defense in her new show, which debuted Sunday.

“For the record, that was not a looks-based joke — that was about her ugly personality. She has the Mario Batali of personalities,” Wolf said of Sanders after calling her “my best friend.”

Wolf buried the joke half-way through her show, after taking shots at everyone from Elon Musk to the Miss USA Pageant to Camille Cosby. In a segment called “Five Women I’m Not Supporting,” the comedian said of Bill Cosby’s wife, “Oh, you supported your husband. What’s the plan after this, Camille? Start a super-group with Dottie Sandusky?”

The smack down referred to Cosby and former Penn State football coach Jerry Sandusky, both of whom have been convicted for sexual misconduct.

During the opening monologue, Wolf also addressed another hot button topic from the past week: The NFL’s new rules regarding the National Anthem.

Wolf said the controversy around players kneeling during the anthem was overblown. “Addressing the National Anthem and ignoring the other problems is like making sure JFK was wearing his seat-belt.”

“The Break With Michelle Wolf” can be seen on Netlfix, with new episodes up on Sunday nights.