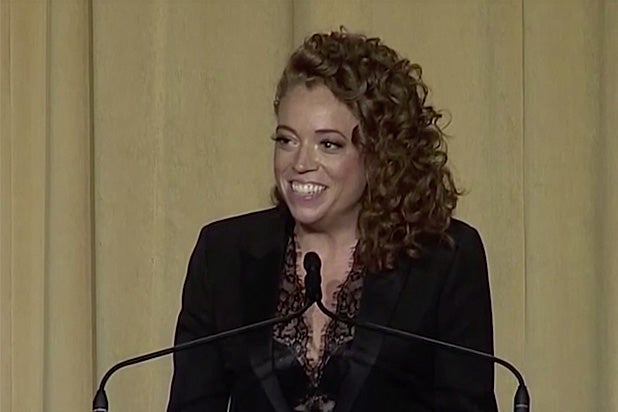 After torching Donald Trump, Republicans, Democrats and the media in a no-holds-barred act at the White House Correspondents’ Dinner Saturday night, comedian Michelle Wolf responded to those who were angered by her jokes… by telling more of them.

First among her critics was former Trump press secretary Sean Spicer, who called her routine a “disgrace” on Twitter. Wolf’s response?

Tonight’s #WHCD was a disgrace

Among those hit the hardest by Wolf’s wisecracks was current press secretary, Sarah Huckabee Sanders, whom the comedian called out for spinning the truth at the podium and likened her to the sexism-reinforcing Aunt Lydia from “The Handmaid’s Tale.” Many in the media rallied around Sanders in support.

“Morning Joe” co-host Mika Brzezinski chastised Wolf, saying she hated watching a “wife and mother be humiliated on national television,” while New York Times’ Pulitzer Prize-winning reporter Maggie Haberman praised Sanders for not walking out despite facing “intense criticism of her physical appearance, her job performance, and so forth.”

Watching a wife and mother be humiliated on national television for her looks is deplorable. I have experienced insults about my appearance from the president. All women have a duty to unite when these attacks happen and the WHCA owes Sarah an apology.

Why are you guys making this about Sarah’s looks? I said she burns facts and uses the ash to create a *perfect* smoky eye. I complimented her eye makeup and her ingenuity of materials. https://t.co/slII9TYdYx

That @PressSec sat and absorbed intense criticism of her physical appearance, her job performance, and so forth, instead of walking out, on national television, was impressive.

Wolf laughed off such accusations, saying she wasn’t going after Sanders’ looks, but her “despicable behavior.”

Hey mags! All these jokes were about her despicable behavior. Sounds like you have some thoughts about her looks though? ???? https://t.co/JRzzvhBuey

Comedian Kumail Nanjiani took Wolf’s defense, calling out Haberman for her praise of Sanders’ reaction to Wolf’s jokes, saying that Wolf was not criticizing her appearance and reminding the reporter of the attacks Trump and his administration have made on the media and others.

They call you liars. They call Mexicans rapists. They call Muslims murderers. They support white supremacists. But someone calls them out on what they do, & suddenly they’re heroes for not walking out. https://t.co/B9aT7moy2C

Many other members of the media served up chilly responses to Wolf’s caustic routine, which you can read by clicking here.