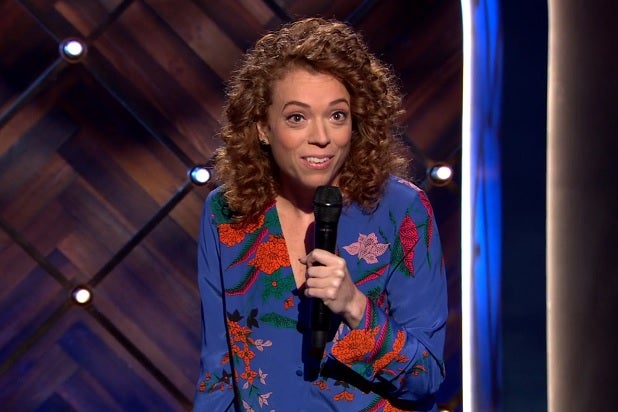 Michelle Wolf thinks Donald Trump might be picking allies for the United States based on whether their leaders overshadow him with their attractiveness.

On her Netflix show “The Break With Michelle Wolf,” the comedian joked that Trump’s recent foreign policy moves are pretty confusing. Trump insulted Canadian Prime Minister Justin Trudeau on Twitter after a chilly G7 summit, in which longtime U.S. allies were frustrated with Trump over actions like trade tariffs and frequent demands to allow Russia back into the group.

Right after that, Trump met with North Korean dictator Kim Jong Un in Singapore, where he said Kim agreed to denuclearization. The summit didn’t actually set any firm rules for that process, however, and skipped any discussion of Kim’s human rights abuses against the people of his country.

“I think what it comes down to is Trump doesn’t want to be allies with anyone who’s good looking,” Wolf joked. “I mean, think about it. Recently, Trump upset Trudeau — hot; Macron — cute; Merkel — handsome. And look who he made happy: Kim, the guy who looks like the Pillsbury Doughboy wearing pajamas.”

Wolf went on to talk about how, even though Trump’s foreign policy approach appears to be kind of working — at least in the case of securing peace with North Korea — it definitely doesn’t make any real sense.

“Look, if this literal s–t circus leads to some sort of lasting peace, I’m all for it,” she said. “But let’s not pretend that any of this is smart. It reminds me of that one time when I was 13 when I was bowling with my friends, and I hopped backwards on one leg and then bowled a strike, and then I just kept doing that because I thought it was my good luck charm. Did it work a couple of times? Yes. But was it an objectively good strategy? No. Did Jeremy ever want to go out with me again? Double-no! So that’s my advice to Trump and everyone on this whole thing. Keep doing whatever crazy s–t keeps our organs from melting in a mushroom cloud, but just admit that it’s incredibly dumb, and you’re dumb, and you have no plan!”