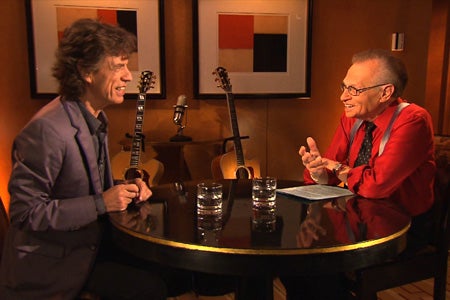 The Rolling Stone’s 1972 classic "Exile on Main Street" was re-released this week.

Like most things the Stones try to sell, there’s been a big media push behind it (Jimmy Fallon booked an entire week of musical acts covering "Exile" songs).

Larry King dedicated the entire hour of his Tuesday show to a taped interview with Mick Jagger.

Amid the expected softball questions, King managed to cover the topic of drug use. After all, the Rolling Stones’ longevity has set the anti-drug movement’s logic back about 30 years.

Here’s that part of the transcript:

KING: You only had one law problem, right? A marijuana thing that you weren’t convicted. Right? You were never convicted?

JAGGER: I think I was. It was a long time ago. I think I was — every time I come to the United States I still have to sort of go to the special place.

JAGGER: Yes, yes, even though it’s 40-something years ago. The marijuana conviction, yes.

JAGGER: I have to go into a room.

KING: You have to report?

JAGGER: Well, you go — you can’t go through — you know the immigration line?

JAGGER: So sometimes if there is someone that knows something about how to deal with it, they can do it. But normally I have to go to a special room.

KING: Lenny Bruce once said it will be legal some day because every law student I know smokes it.

JAGGER: Well, it sort of half-happened, doesn’t it, in the –

KING: Should it be legal?

KING: Do you think it should?

JAGGER: Well, the whole question of legalizing drugs is fraught with — someone asked me this the other day. And I said, you know, the — I don’t know if I got into trouble so maybe I think, but, you know, you usually try these things out in very small places. You know, like, so you try this in — you know, like you try a new product out, you know, in a small kind of society or an island somewhere.

And in England they always try out new mobile phones in Isle of Man. They’ve got a captive society. So I said, you should try — you should try the legalization of all drugs on the Isle of Man and see what happens.

KING: Do you think it will ever happen? Ever is a long time.

JAGGER: Ever is a long time. People — you know, there is certainly a — human beings seem to have a propensity to want to take drugs in some form, you know.

JAGGER: Thousands of years people have taken drugs, whether it’s alcohol, which was invented about 5,000 years ago. People have been using that. And all kinds of marijuana and all these things, tobacco. I don’t know how many thousands of years. A long time, I’m sure. And so all these drugs, you know, have been — it seems to be the propensity of human beings to want to use them.

So you have to — I think you have to take that as red, you know. But then what do you do when it affects so many people’s lives and not in a good way, you know. And then also, then you get a lot of violence at both ends of the scope.

So you get violence in some countries producing country violence. And then you get — which like we have in Mexico now, and you get violence at the other end of people trying to obtain drugs.

So you’ve got that part of it is — that’s the part that speaks to some sort of legalization. Because that you would hope would help the violence from both ends of the supply line.

KING: When it was in the group and it was famously reported about Keith Richards and the like, did it ever affect your performance?

JAGGER: No, but — no, but you don’t — I don’t — personally, you know, like performing taking drugs. I always think it’s better to be not taking drugs or drinking or anything. That’s not saying I’ve never done it because I have. But I sort of learned I think after a while there has been — it didn’t take me that long to realize that it wasn’t a good thing.

You know, taking drugs on a recreation level is one thing. But taking them while you’re working on a stage is, you know, I don’t think it was that great.

JAGGER: It’s the control factor. And the thing about being on stage, you really want to feel that you’re sort of in control a lot, I think, because I don’t think you want — it’s not a place where you want to be out of control.