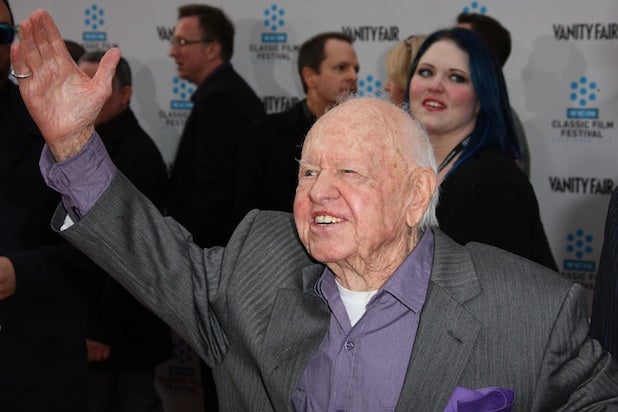 Mickey Rooney, the famed actor and father of nine, has died at 93 years of age, individual with knowledge of the situation told TheWrap.

The actor won an Emmy and an honorary Oscar in a storied career that included his own television shows and appearances in films such as “Breakfast at Tiffany’s” and “It’s a Mad, Mad World.”

Rooney was born Joseph Yule, Jr. in Brooklyn, N.Y. His parents, Joseph Yule and the former Nellie Carter, were vaudeville performers who working in a production of “A Gaeity Girl” when he was born on Sept. 23, 1920. He wore a specially tailored tuxedo when he began performing with his parents at the age of 17 months. Rooney, who grew just two inches above five feet tall, began acting in movies in 1926, and featured in 15 films in MGM’s Andy Hardy series  from 1937-46; he also starred in the 1958 revival.

He earned four Oscar nominations — along with a Juvenile Oscar and that honorary Academy Awards — for acting in movies that spanned 40 years, from 1939 (“Babes in Arms,” with Judy Garland) to 1979 (“The Black Stallion”). Rooney won an Emmy and Golden Globe for his work in the 1981 telefilm, “Bill.” He also was the voice of Santa Claus in four animated television specials, including 1970’s “Santa Claus is Comin’ to Town.”

In 2011, he made a cameo in “The Muppets,” appeared in several films in 2012 including “The Woods,” with Franco Nero, and was in production on “Dr. Jekyll and Mr. Hyde” when he passed. According to director Shawn Levy, Rooney had just done some work for “Night at the Museum 3” last month.

Rooney married eight times and in the 1950s and 1960s, Rooney was often the subject of comedians’ jokes over his inability to stay married. He married his last wife, Jan Chamberlain, in 1978. In addition to his nine children, he had 19 grandchildren and several great-grandchildren.

In 2011, he received a restraining order from his stepchildren, Chris and Christina Abner, alleging that they trapped him in his home and engaged in elder abuse, which included taking over his finances. He featured in a documentary about the experience, “Last Will and Embezzlement,” in 2012.

It is with sadness that I say my father has passed today. I loved him and so did the world. He inspired so many. Rip dad. Your son.

Jethro Nededog contributed to this article.