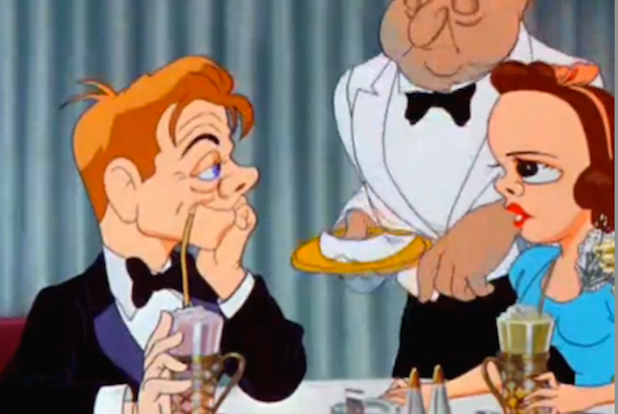 Need more proof that Mickey Rooney was one of the few remaining stars from Hollywood’s golden age?

The “Boys Town” actor’s death last weekend at the age of 93 means that the last survivor caricatured in the 1941 Merrie Melodies cartoon “Hollywood Steps Out” has gone to the big movie premiere in the sky.

In all, 46 stars were included in the Warner Bros.animated comedy short — a list that boasts such deceased movie icons as Clark Gable, Greta Garbo, Jimmy Stewart, Cary Grant, James Cagney, Humphrey Bogart and Rita Hayworth. They are depicted as having a glamorous night out at Ciro’s, a famous Los Angeles nightclub that fell victim to changing tastes and closed in the 1950s. It’s a Hollywood that has faded into history, if it ever existed at all.

Rooney is seen sharing a meal and a milk shake with frequent co-star Judy Garland, only to have his eyes pop out when presented with the then- exorbitant bill for $50. The joke it sets up will only be funny to fans of the “Andy Hardy” series, a demographic nearing extinction.