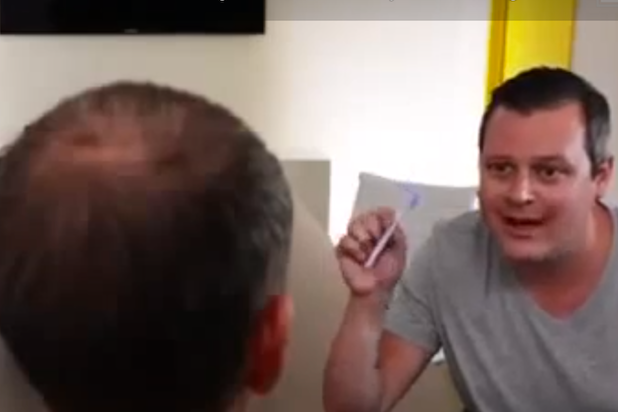 A video that Microsoft’s Windows Phone team posted Sunday was meant to be a “light-hearted poke” at the new iPhones, but it rubbed somebody the wrong way – somebody important, we gather – since the tech giant pulled the spoof down from YouTube almost immediately.

So what was so offensive about “A fly on the wall in Cupertino?”

Nothing obvious. The video depicts a pair of designers pitching new ideas for the iPhone sometime in “early 2013” to an executive seated at a table. Given the less-than-impressed reaction to the new features announced last week for the iPhone 5S and 5C, Microsoft merely hit most of the easy targets that the Internet has been openly mocking for days: “innovations” such as more color choices, a polycarbonate case, fingerprint reader and better camera.

Some tech blogs speculated that the question of taste may have had something to do with Steve Jobs – that is, the exec depicted in the video, who we only see from behind and who never speaks, is dark-haired and particularly slight — bearing at least a back-of-the-head resemblance to the late Apple co-founder (current Apple CEO Tim Cook is distinctly silver-headed).

Either way, Microsoft pulled down the video and made the following statement: “The video was intended to be a light-hearted poke at our friends from Cupertino. But it was off the mark, and we’ve decided to pull it down.”

It’s not like Microsoft doesn’t have the guts to poke fun at iPhone – they’ve done it many times before. So there’s something about this video they’re just not comfortable owning.

Lucky for us, the Internet is written in ink these days, and someone grabbed a copy. You be the judge: