(Warning: This post contains spoilers through the finale of Netflix’s “Midnight Mass.”)

“Midnight Mass” throws viewers for a loop halfway through the seven-episode limited series, when Riley Flynn (Zach Gilford) bursts into flames after being turned into vampire by an angel (it makes sense in context!) in front of his high school sweetheart and good friend Erin Greene (Kate Siegel). Erin is left screaming as the ashes of Riley fly around her on the boat they’ve been sitting on all night while he told her the tale of Father Paul’s (Hamish Linklater) true identity and plans for Crockett Island.

From there on out, Erin is the new (reluctant) hero of “Midnight Mass,” and not long after, Father Paul (who is really Monsignor Pruitt) gives up his cause, which is taken over by religious fanatic Bev Keane (Samantha Sloyan). Those two women are the ones who lead their respective factions into battle in the end, an idea that actually came to the “Midnight Mass” team late in the process, even though creator Mike Flanagan had been working on the project for more than a decade.

Flanagan remembers talking to producing partner Trevor Macy when they realized “Riley might not be the star of the show.” At first, he admitted, “I thought this was a show about Riley versus Father Paul. And then, ultimately, it’s a show about Erin versus Bev. And there’s a handoff with both. Those characters can only take it so far before Bev and Erin take it over.”

Also Read:
‘Midnight Mass’ Star Kate Siegel on Erin’s ‘I Am That I Am’ Speech and That ‘Terrifying’ Finale Battle

That shift in focus to the female characters had other effects. “They represented not an argument between belief and disbelief, which Riley and Father Paul really kind of did, (but) an argument between moderatism with faith and fanaticism, and that’s a much more relevant argument, I think. And it’s, unfortunately, the one we see playing out more in the world.”

Macy added: “Yeah, I mean, everybody knows a Bev Keane, who’s strident about something or other. And you hope there are a few more Erins in the world.”

“And too many Bev Keanes are getting elected to public office,” Flanagan said. “So that was it. I think there’s so much in our discourse that’s polarized and that is the extreme versions of left or right or any kind of belief system. The extreme sides will come at each other so hard. It just really felt like the show needed to be handed off to the moderate, that that was the hero that the story deserved.”

See below for more from TheWrap’s Q&A with Flanagan and Macy.

The characters in “Midnight Mass” all clearly have different religious beliefs and approaches to religion. How would you describe exactly what you were trying to represent with the perspectives and actions of Riley Flynn (Zach Gilford), Father Paul (Hamish Linklater), Erin Greene (Kate Siegel), Sheriff Hassan (Rahul Abburi) and Beve Keane (Samantha Sloyan)?

Mike Flanagan: We, as human beings, always are going to be drawn toward trying to answer unanswerable questions, questions about what happens when we die, how we should live our lives, how we interact with each other. When this whole project started, it was really about a conversation between Riley and Father Paul, which represented my opinions about how I grew up and the faith that I had been raised in versus this kind of new questioning that I had that taking all that apart. 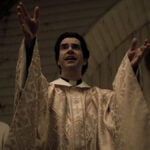 Over the more than a decade that I’ve worked on the thing, I became more interested in kind of staying away from those polar views and looking at moderatism and looking at the beauty of that. And Erin represents that in a really profound way. Represents a person who lives by the principles of her faith, but in an inclusive, forgiving and open and welcoming way. And then it just kind of continued to snowball. What are the different ways we approach faith and how can I represent that in different characters? How Islam, in particular, is understood, or misunderstood, in the West, how it is vilified by some. And Hassan, as an outsider, but a man of faith, himself a moderate, how can we use him to show commonality and to show a lot of the things that we have in common between these faiths, which are very much, I think, cousins?

Bev, for me, represents some of the things that scare me the most about fundamentalist thinking. And to your point about that quote, about people who need, not only to feel that God loves them, but that God loves them more than he loves other people. I think that’s a pervasive thing and I think it’s a destructive way of thinking. And unfortunately, Bev is the character that I see the most in the world, at least in the news. And I think she represents how a well-intentioned faith can be corrupted and how it can be kind of weaponized, how people can be made to do things they otherwise never would. And that we see all over the world.

Trevor Macy: And not just in religion, but in politics and all sorts of tribalism. Because the show doesn’t seek to go there, in terms of, the show is not anti-religious. The show is not pro-religious either. It’s simply asking a lot of hard questions. And, if anything, comes down on the side of moderatism versus fanaticism.

Flanagan: And wanting to celebrate forgiveness, empathy and faith.

Macy: Values that can be very Christian, or not.

Flanagan: But that kaleidoscope of perspectives only grew as the show evolved. And I hope will help make it so that no matter who the viewer is or what their background is, that they have a way into this story and a character that the show loves and portrays with respect.

Readers can find more from TheWrap’s interview with Flanagan and Macy here, here and here, and our chats with Siegel, Gilford and Linklater about “Midnight Mass” here and here and here.