There are no Trump stand-ins at the new production of “A Midsummer Night’s Dream” which opened Monday at the outdoor Delacorte Theatre as part of the Public Theater’s Shakespeare in the Park series.

Instead, the Bardically named director Lear deBessonet delivers an uneven, down-the-middle version of one of Shakespeare’s most familiar comedies that emphasizes the broad, sitcommy action among the various sets of mismatched lovers.

Hers is a “Midsummer” by way of TVLand, complete with bouncy musical “bumpers” between the scenes (the original music is by Justin Levine) that recall the interludes in old reruns of “Seinfeld” or “The Brady Bunch.”

The performance style runs very much toward the latter, with an emphasis on broad, broad comedy — and not just for the rube-like Mechanicals whose efforts to mount a play for the Duke of Athens are the usual source of lowbrow slapstick in Shakespeare’s classic.

As Helena, the young Athenian who pines for the already-betrothed-to-another Demetrius (Alex Hernandez), the delightful Annaleigh Ashford flops about the stage like a besotted rag doll, clinging to her crush’s leg and dispensing slightly off-kilter line readings to great effect.

Shalita Grant brings a streetwise spunk to her pal Hermia, who’s itching for a catfight when she’s led to believe Helena has stolen her own crush, Lysander (Kyle Beltran), amid fairy-induced shenanigans. 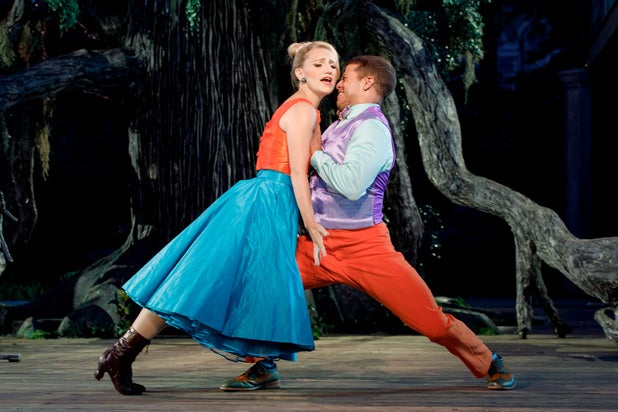 And Danny Burstein brings a touch of Bert Lahr’s Cowardly Lion to Nick Bottom, the fool who’s turned into a literal ass so he can woo the queen of the fairies when her king contrives a revenge scheme. Burstein claps his hooves and scratches at this ears with hilarious earnestness.

Less successful is Kristine Nielsen’s trickster Puck, whose mugging recalls one of those sitcom characters like Urkel forced to rely on catchphrases and double-takes late in a series’ run.

The one real veteran of a classic sitcom, “Cosby Show” alumna Phylicia Rashad, mostly dispenses with comedy for a more regal take on the Fairy Queen who is duped into falling for Bottom by her jealous husband.

Indeed deBessonet seems to have something very different in mind for the play’s Fairyland altogether: Not only are King Oberon (Richard Poe) and Titania (Rashad) decidedly grey of hair but all of the fairies are as well, with their dance suggesting a movement class at some wooded retirement home.

It’s a charming idea that Fairyland might be populated by eminence grises who haunt (and counsel) the show’s younger lovers with the wisdom of experience and hindsight — but it’s not fully integrated into the production, particularly tonally.

After all, subtlety is not the predominant theme of this “Midsummer,” which seems bent on trotting out just about every Borscht belt cliche to poke us in the ribs. At one point, Puck even stoops to using a whoopee cushion.

"Cabaret" (1967) Joel Grey sang "Willkommen" to the big time, winning both a Tony (and later an Oscar) playing the M.C. in this musical set in the early days of Nazi Germany.
View In Gallery
x