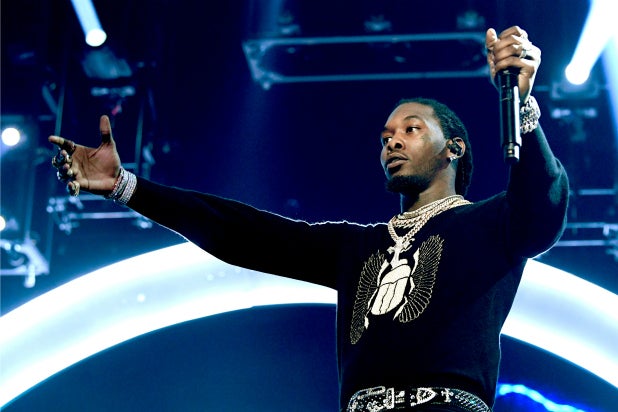 Quibi announced on Wednesday that it has added rapper Offset of Migos to its roster of stars with shows coming to the new mobile streaming service.

The show, “Skrrt With Offset,” will feature high profile names in pop culture as they journey with host Offset and their cars, unveiling the personal stories behind them, topped with a unique auto experience.

“Quibi will give me a chance to connect with my fans in yet another way,” the Migos rapper born Kiari Cephus said in a statement. “They don’t know how much I know about cars for real. This platform will let them see there is more to me than just buying cars.”

“Skrrt With Offset,” is being produced by STXtelevision and Scott Weintrob’s production company Large Eyes, which has an overall deal at the studio, and is responsible for Netflix’s series “Fastest Car.” Weintrob is also the director of the Emmy-winning series “Top Gear.”

The new Quibi series is one of two being produced by STXtelevision for Quibi. STX is also producing a reimagining of “PUNK’D,” which will air on the newly launched mobile network in 2020.

“We are excited to be partnering with Quibi on our second new series for the platform,” said Jason Goldberg,  STX Entertainment Chief Creative Officer for New Media Group and Alternative Content, in a statement. “The team is forward thinking and genuinely looking for new programming that you won’t find anywhere else. As producers, we look forward to working with Offset and creating shows that will be fun, memorable and will feature rides that take insanity to the next level of super fandom in the world of the coolest cars.”

Shows will only be available on mobile devices, with each episode running no longer than 10 minutes. The app unveiled by Jeffrey Katzenberg and Meg Whitman will cost viewers $4.99 per month for ad-supported viewing, or run $7.99 for ad-free viewing when it debuts next spring.

“From ‘Fastest Car’ to ‘Top Gear,’ we have creatively helped define the television car genre,” Weintrob said in a statement.  “‘Skrrt with Offset’ will continue to drive the genre to the next level and I’m excited to cross the finish line with Offset as he is a true car expert.”

Last week Quibi announced that it had sold out of its $150 million first year advertising inventory.