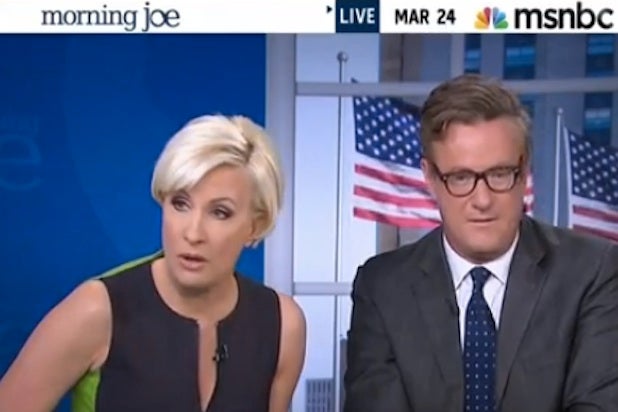 “Right now, we have to report on what we know!” Brzezinski insisted as Joe Scarborough speculated the plane could be somewhere other than the Indian Ocean.

CNN’s “New Day” has beaten “Morning Joe” in the ratings for the past six consecutive days with its wall-to-wall coverage of the missing Malaysian plane. “New Day” co-host Chris Cuomo earlier defended his network’s coverage by saying it’s their job to “have more questions than there are answers, because simply not enough is known. So if it seems like we’re nibbling around the edges, it’s because we are.”

“Can we go to news school for a second please?” Brzezinski said. “That’s last week’s question and the theories are for later in the show and I’ll tell you why…”

Scarborough interrupted Brzezinski and told her to bring it down and relax but she ignored him and continued her media criticism.

“Because — everyone stop for a second — here’s what we’ve got at this point,” Brzezinski explained. “It’s 17 minutes past the hour. We shouldn’t be talking about theories. If you want to go to a network that has theories about Pakistan just blared across for hours and hours and hours, you’ve got many choices out there!”

“I love Pakistan, I went there for spring break,” Scarborough riffed.

“But that’s actually capitalizing on a non-story for the sake of ratings because people’s imaginations are pricked by this, and that’s not responsible,” Brzezinski shot back. “We did the plane, we will do the plane, it will be done again. We will do the facts. Just stop! We’ve got to go to Ukraine!