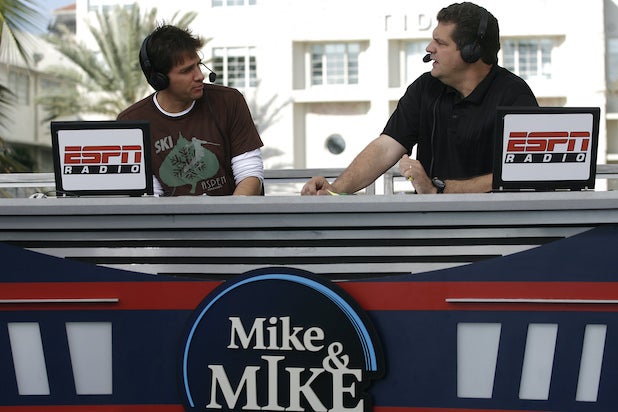 Mike Golic addressed the cancellation of his ESPN Radio show — and multi-decade tenure — on Tuesday’s “Golic and Wingo.”

Below are the former “Mike & Mike” co-host’s remarks on the end of his era at the platform.

We know what’s going on with the announcement, obviously, our last show’s going to be July 31. Certainly was not my choice, I would have loved to have kept doing the show. Listen, I didn’t want to be cut by the Houston Oilers, didn’t want to be cut by the Miami Dolphins, you know? What you want and what happens aren’t the same … so I appreciate what’s been going on on Twitter, you know, the outpouring of positive thoughts — certainly not everybody, and that’s fine because you can’t please everybody. But it’s been incredible what I’ve heard from people out there, and I do appreciate that.

I’m not retiring; I’m too young to retire. My wife won’t let me retire. It’s so wild though that the portion of morning radio, at least for now, will be done. I’ve been getting up this early since I started morning radio in Phoenix with my buddy Bruce Jacobs out there. And that was in ’96. So from ’96 until July 31 for work I’ve been getting up at 4:15 in the morning. To which of course my wife said, “just think, we can spend time early in the morning,” you know what I’m talking abou. Of course I tried that. And she said “Why don’t you go get some work at a morning donut shop. Go make the donuts.”

Again, I’m back Monday and I’ll be back until July 31 and I’ll talk more about it then, what I’m going to do. I’m still going to stay in the business and such. Again, this was management’s choice to do this and obviously just like coaches, they have every right to do what they want to do. I would love to keep doing it, but not in the cards right now. So we’ll see where it goes, but I do plan on still being in this business.

“Golic and Wingo” was canceled on Tuesday, though the show will run through the rest of July. Simultaneously, ESPN Radio announced that Golic’s former “Mike & Mike” partner, Mike Greenberg, would be returning to the audio medium to do afternoons from noon to 2 p.m.

“In radio there is an intimacy in the relationship with the audience that is different from any other medium,” Greenberg said in a statement on Tuesday. “I have always enjoyed that and am really looking forward to rediscovering it.”

The “Golic and Wingo” morning show is being replaced with a new show co-hosted by Keyshawn Johnson, Jay Williams and Zubin Mehenti. Golic’s son, Mike Golic Jr., got a radio show with Chiney Ogwumike from 4 p.m. to 7 p.m.

When reached by TheWrap, a spokeswoman for ESPN Radio declined to comment on Christine Golic’s tweets.

The long-running and popular ESPN Radio show “Mike & Mike” ended in late 2017, when Greenberg left for the new ESPN TV series “Get Up!” He still hosts the television program. At the time of Greenberg’s departure, “Mike & Mike” was replaced by “Golic and Wingo,” a program Mike Golic Sr. shared with Trey Wingo.