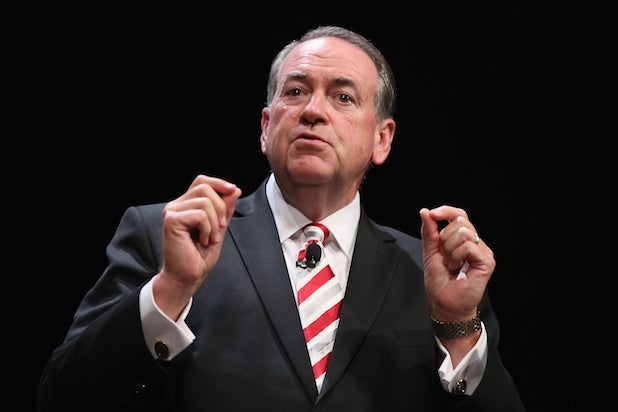 As TheWrap first reported, Sanders is facing multiple ethics complaints after telling the White House press corps this week that Hill committed a “fireable offense” when she called President Donald Trump a “white supremacist” on Twitter.

In an interview Friday, the former presidential candidate told the Arkansas Democrat-Gazette that the attack on his daughter is “baseless” and “totally out of bounds.”

On Thursday, the Democratic Coalition, an anti-Trump Super PAC, filed an ethics complaint against Sanders with the Office of Government Ethics, citing a federal law — punishable by a fine or up to 15 years in prison or both — which makes it a crime for any executive branch employees to influence or threaten to influence a private employment decision.

“The initial assault by White House press secretary Sarah Huckabee Sanders on Jemele Hill’s freedom of speech has now been exacerbated by her father,” Jon Cooper, Chairman of the Democratic Coalition, told TheWrap. “All Americans, regardless of their political affiliation, should be outraged by this. An attack on one person’s freedom of speech is an attack on us all.”

The group then filed a second grievance Friday after the White House press secretary doubled down on her earlier comments.

Asked about the complaint during a White House briefing Friday, Sanders called ESPN “hypocritical,” saying that the network once suspended anchor Linda Cohn over comments questioning the company’s business strategy, implying that political positions taken by ESPN personalities have driven away viewers.

“ESPN has been hypocritical,” Sanders said. “They should hold anchors to a fair and consistent standard.”

In April, Cohn told WABC Radio’s that she “felt that the old-school viewers were put in a corner and not appreciated with all these other changes” suggesting that politics were becoming too big a part of the network’s programming.

Although Cohn was not officially suspended, she faced disciplinary action since she was not authorized to appear on the radio show in which she was critical of ESPN — but not for expressing a political point of view.

Sanders clarified Friday that, while Hill’s comments were indeed a “fireable offense,” she was not specifically calling on ESPN to fire her, adding, “That’s something for ESPN to decide.”