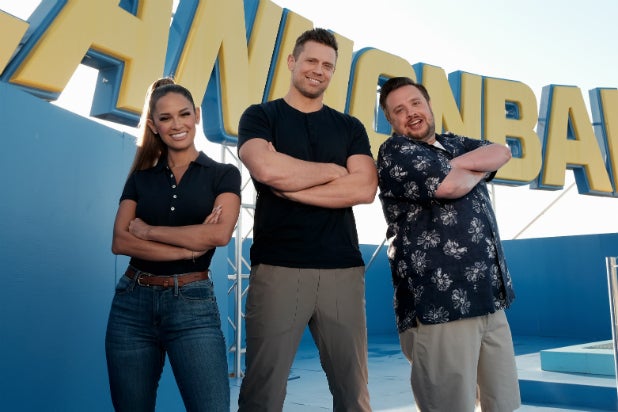 The 10-episode “Cannonball” will premiere on USA in the summer. “Cannonball” will feature contestants from across America who face off in the “biggest, wettest, slippery-est water sports competition ever created,” according to the popular cable channel. From sliding off a 100-foot waterslide to rocketing off one of the world’s fastest drop towers, “Cannonball” contestants will battle a variety of water obstacles to win a $10,000 cash prize.

“Cannonball” is produced by ITV America’s ITV Entertainment, based on the original format by ITV Studios Netherlands Content B.V. and licensed by ITV Studios. The series was created by John de Mol, who serves as executive producer along with Shye Sutherland, Keith Geller, Bernie Schaeffer, Stijn Bakkers and Kevin Wehrenberg.

Below are individual bios for each member of the trio. They are courtesy of USA.

Mizanin
First introduced to TV audiences as one of the seven strangers on “The Real World: Back to New York,” Mizanin parlayed his reality TV fame into a successful WWE career. Making his WWE debut in 2006, he has since gone on to hold multiple championship titles including the WWE Championship, Intercontinental Championship, and Tag Team Championship. Mizanin has also starred in several films produced by WWE Studios, including “The Marine 3: Homefront,” “The Marine 4: Moving Target,” “The Marine 5: Battleground,” “The Marine 6: Close Quarters,” “Christmas Bounty” and “Santa’s Little Helper.”

Diaz
Emmy Award-winning television host Rocsi Diaz is best known as the former co-host of the ultra-popular mega music show “106 & Park,” where she interviewed everyone from Lady Gaga to Obama. As a co-host and daily correspondent on “Entertainment Tonight,” Diaz was known for setting the tone for what’s hot in music, movies and entertainment. She reached 85 million homes worldwide during her time with “106 & Park,” and has since gone to host “The Daily Share,” “Dating Naked,” “Behind The Movie” and People TV’s “Chatter.”

Gibson
After a stand out performance at the 2018 Just For Laughs New Faces showcase in Montreal, LA-based comedian Simon Gibson has exploded into the comedy scene touring cities across the country and recently appearing in the yet-to-be-released series “Brews Brothers.” He can currently be seen as one of the leads of the series “Inside Jokes,” chronicling his journey from backyard open mic comic to the mecca of comedy at the aforementioned JFL Montreal and center stage for the New Faces showcase.  Gibson recently appeared as host for the Kaaboo music/comedy festival as well as for “Last Call with Carson Daly.”