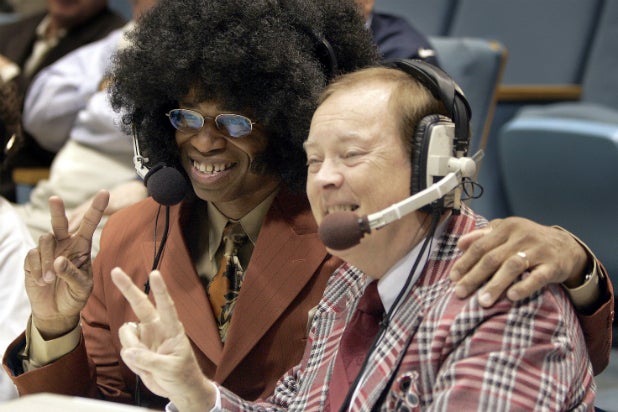 After 36 years, Mike Patrick is hanging up his ESPN announcer’s blazer.

Patrick, who joined ESPN in 1982 — just three years after the cable channel’s inception — was the voice of “Sunday Night Football” when the self-declared Worldwide Leader in Sports owned those NFL rights. He actually called ESPN’s first-ever regular season National Football League game back in 1987.

“It’s wonderful to reflect on how I’ve done exactly what I wanted to do with my life,” Patrick (pictured above, right, at a retro game with Len Elmore) said on Wednesday. “At the same time, I’ve had the great pleasure of working with some of the very best people I’ve ever known, both on the air and behind the scenes. While I’m not sure exactly what’s next for me, I’m looking forward to continuing my journey with new life experiences.”

“No play-by-play commentator in ESPN history has accomplished more than Mike Patrick,” added Lee Fitting, ESPN vice president, Production. “He is not only a gifted professional who skillfully captures the moments and makes others around him better; he brings a genuine sports fan’s excitement to the telecasts. It was a truly incredible run.”

Patrick’s final event for ESPN was the 2017 AutoZone Liberty Bowl on Dec. 30. The network is airing tributes to him throughout today’s “SportsCenter” episodes.