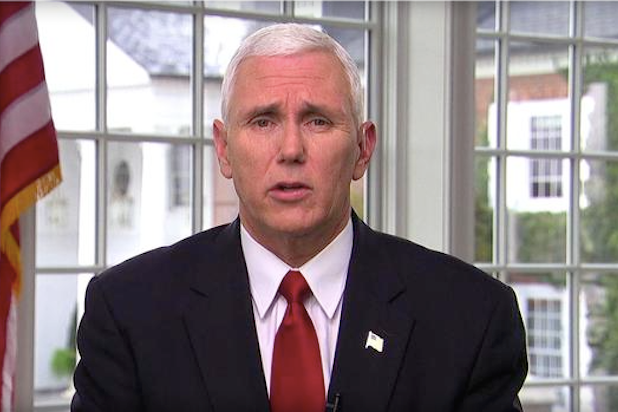 Vice President Mike Pence is under fire for granting an interview to conservative Texas radio host Michael Berry, known for featuring a blackface comedian on his show.

“Here’s a guy who plays bingo with his audience about the murders in Chicago,” Angelo Carusone, president of progressive watchdog Media Matters, told TheWrap. “The idea that the vice president would dignify that kind of program with his office should be alarming.”

Also Read: Joe Biden Slams POTUS in Charlottesville Op-Ed: 'Do What President Trump Has Not'

On Monday, Pence spoke to Berry and his colleague, KTRH radio host Shara Fryer, about the federal response to Hurricane Harvey, which dumped thousands of gallons of water across southern Texas and parts of Louisiana.

The news triggered a swift condemnation by Media Matters, which claimed Berry “has a long history of making sexist, homophobic, anti-Muslim, and anti-African-American comments on his radio show.”

In response to the backlash, Press Secretary to the Vice President Marc Lotter told TheWrap in a statement:”The Vice President conducted an interview on a highly-rated radio news station during an emergency situation to reach out to those who have been negatively impacted by Hurricane Harvey. The interview was scheduled with Shara Fryer.”

A White House official familiar with the situation told TheWrap Pence’s team only found out that Berry would be conducting the interview as the segment began.

The White House posted a transcript of the interview on its official website under the title: “Interview of Vice President Pence by Michael Berry and Shara Fryer, KTRH.”

“They sent out the transcripts,” Carusone said. “They’re proud of it. They’re not even hiding it.”

Berry has been criticized for mocking Chicago homicide victims in his regular segment: “Chicago Weekend Crime Report,” which included a bingo game in which listeners were asked to guess where in the body victims were shot.

“He reads out reports from shootings in Chicago,” Carusone explained. “The bingo card has a series of injuries on it: ‘shot in the arm,’ ‘shot in the leg,’ and you mark your bingo card. It’s just like bingo but you’re playing it with the lives and limbs of predominantly black people in Chicago.”

Berry was later forced to apologize. But a week after ending the regular segment, he told his listeners that he hadn’t “had any racial conversations since I got in trouble, so maybe we’ll delve back into that,” adding “we all” miss the segment.

After a 14-year-old by the name of Tyjuan Poindexter was shot in a 2015 drive-by shooting, Berry told his listeners that “he won’t have to live with that name anymore.”

“It’s the same blackface stuff you would have seen 100 years ago that has disappeared from our society for a long time and he resurrected it,” Carusone said. “Berry even put up a billboard promoting his radio program with Shirley B. Liquor on it. That’s how much that character was a part of the show.”

Pence’s interview comes just two weeks after President Trump defended far-right protesters at the Charlottesville rally, saying they were not all neo-Nazis and placing blame on “many sides.”