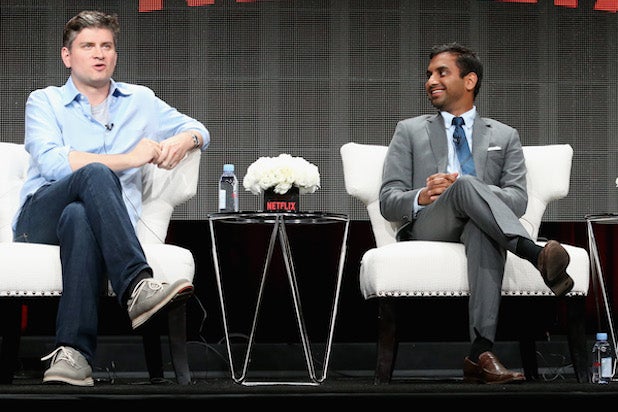 Mike Schur collaborated with actor Aziz Ansari for the full seven-season run of NBC’s “Parks and Recreation.” And following an accusation of sexual misconduct posed against Ansari last year, “The Good Place” creator says he’d still work with him, noting “the important thing to me is that we all keep trying.”

Last year, Schur apologized for having comedian Louis C.K. — who has now been accused of sexual misconduct by multiple women — guest star on “Parks and Rec,” when he’d heard “the rumors about him.” Schur told the Daily Beast he does not feel the same way about his working relationship with Ansari.

“Well, you know. (Laughs) The answer is yes, I would,” Schur said, when asked if he’d reteam with Ansari — given his stance on CK — in an interview published Friday.

“And the tricky thing about all of this stuff is this kind of national reckoning that the entertainment industry has finally had with itself — or at least has begun to have, I would say — we’re far from actually having the complete, sort of thought process and emotional processing that is required. There was a lot of dust and a lot of that dust has now settled a little bit, and now it’s time for everybody to really think hard and reflect and change and grow and do all of that stuff that is required to heal,” he said.

“And I’m not talking about any one person or group of people. The initial revelation of how prevalent all of these things are is over. And now it’s phase two. Phase two is going to be equally tough and hard and it’s going to require a lot of emotional turmoil and thought processes and investigations and all that stuff. And I am happy that it’s happening. I’m excited for it to happen.”

Schur added that his “personal feelings about all of these people are not really super relevant” or at least “way lower on the ladder of importance than a lot of other people’s feelings and thoughts about them.”

“But it’s weird, this question brings us all the way back to the beginning,” Schur continued. “Because the important thing to me is that we all keep trying. Like, so much of this stuff happened in part because no one wanted to confront it or think about it or deal with it or raise their hand and say, this is happening and this is real. And that part of the problem and that sort of calcified system is over, which is good. Now we get to start saying, ‘OK, now that we know about this, let’s talk about it.’ And the only thing you can do is to keep trying to sort through it and figure it out.”