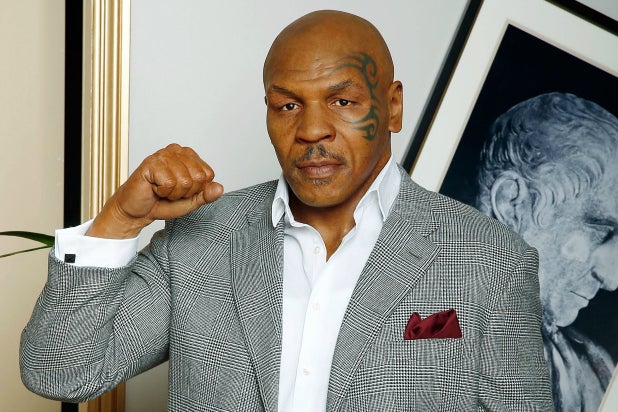 Mike Tyson is sinking his teeth into the Boxing Hall of Fame via a new lawsuit.

The former boxing great is climbing into the legal ring with a complaint over merchandise bearing Tyson’s image and nickname, Iron Mike.

According to the suit, filed in federal court Tuesday, the Boxing Hall of Fame in Nevada “has violated Mr. Tyson’s right of publicity and right to use and exploit the Mike Tyson and Iron Mike trademarks by using and exploiting Mr. Tyson’s name, likeness, and marks on apparel and other items it may offer for sale.”

The suit cites a number of T-shirts bearing Tyson’s image, some of which also sport the phrase “Iron Mike.” The suit further alleges that the Hall “has also entered into agreements with other online vendors, including American Classics Apparel, Macy’s, and Urban Outfitters, to sell products that are purportedly ‘officially licensed’ and that bear Mr. Tyson’s name, likeness, and marks.” None of which has been OK’ed by the boxer, the suit says.

“Mr. Tyson has not authorized this use or exploitation of his name, likeness, or marks,” the complaint reads.

In addition to the apparel, the Hall is also accused of negotiating to sell other Tyson-themed products including energy bars, energy drinks, health-related products and gaming products.

“Mr. Tyson has suffered damages as a direct and proximate result of Defendants’ unauthorized use and exploitation of his name, likeness, and marks,” the lawsuit states.

TheWrap has reached out to the Boxing Hall of Fame for comment.