“Miles Ahead” is the title of Miles Davis’ 1957 collaboration with pianist Gil Evans. The album is brilliant; the movie of the same name is not, but it’s very good, brightly conceived not as a cradle-to-grave bio-pic but rather a musical chart of Davis’ life.

Director-star Don Cheadle has created motifs and moments in the key of Miles Davis, suggesting to the audience what this or that moment in the life of the man who defined cool might have been like. And like all good jazz, you can enjoy it without always knowing where it’s going.

“Miles Ahead” opens in the 1970s, when Miles Davis (Cheadle) was living in seclusion, addled by drugs, not performing, and quite possibly not even composing. Screenwriters Cheadle and Steven Baigelman (“Wicked City”), who share story credit with Stephen J. Rivele and Christopher Wilkinson, have contrived a series of events for their film that most certainly did not happen in the life of Davis, combining them with some that might have happened. It then fuses these didn’t-happens and might-have-beens with only slightly more historically-accurate events from Davis’ life in the mid-’50s, when he was giving birth to cool.

That’s also when the jazz legend met his first wife, whom the film believably casts as the love of his life. Played by the talented and beautiful Emayatzy Corinealdi (“Middle of Nowhere”), Francis Davis was her husband’s match in more ways than one, and Corinealdi, in a stunning performance, makes you believe in her ability to keep up with such a mercurial genius.

The film opens with Davis reluctantly participating in a Rolling Stone interview with Brill (Ewan McGregor), a composite character contrived for the movie. McGregor gamely and cheerfully plays the role, and good for him, because it’s a thankless one. There is little for him to do in this movie, save get smacked around and insulted by a surly Davis as he tries to extract an interview from the reclusive genius. 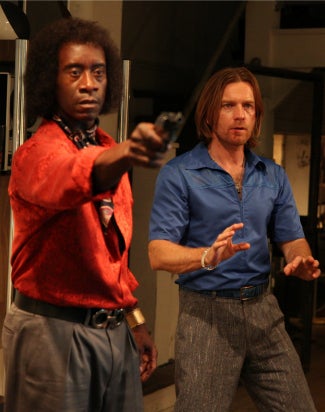 There’s a detour to a caper-style storyline that has Miles and Brill trying to steal back the masters of a session that’s meant to be Davis’ rumored masterpiece; it’s entertaining, but silly, and has nothing whatsoever to do with anything that ever happened in the musician’s actual life.

Still, “Miles Ahead” manages to give us an artist at a creative low point who is nonetheless reflecting over his life, particularly his years with Frances. He regrets the infidelities and betrayals about which he was so cavalier, and the pain he caused, and his sabotage of her musical career with his selfishness. This is a Miles Davis we’ve never seen before: one who is sorry, and wishes he could say so.

Also Read: 'House of Lies' Renewed for Season 5 by Showtime

Cheadle is very likely the only American actor of note presently capable of playing Miles Davis in a major motion picture, and not because of any resemblance between the two. Cheadle looks nothing like Miles Davis — at all. Of course, Cheadle played Sammy Davis, Jr. in the 1998 HBO film “The Rat Pack,” and he didn’t look anything like Davis, either. It’s a matter of talent, and presence.

In jazz, there is a form of musical notation called the chart; it’s analogous to an outline for a script in cinema. In both cases we have the basic idea of the thing, rather than the thing complete. In music, it’s the harmonics and rhythms of the piece; in film, the nature of the characters, their goals and desires. In neither case are all the notes accounted for. “Miles Ahead” is a chart for a movie: Not every event in the life of Davis is accounted for, and sometimes you have no idea where you are in the melody of Davis’ life, yet each individual moment is clearly a part of the same song, certain to come together to a sweet and satisfying place in the end.