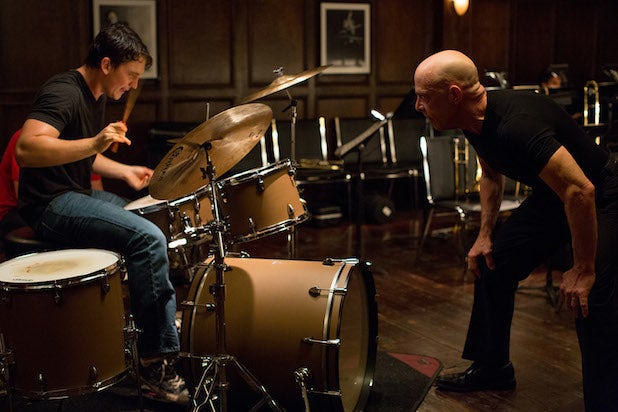 Sundance opened with a bang – loud banging, in fact – on Thursday, as the opening night film starring Miles Teller as a young drummer  drew a rapturous audience response and immediate raves on social media.

A year after he charmed Sundance in the coming of age drama “The Spectacular now,” Teller won praise in  first-time director Damien Chazelle’s film as a drummer determined to achieve musical greatness. For Teller, it’s Charlie Parker or bust.

The film is one of several in the festival, which is screening more than 120 feature-length films, that examine the power of music. Others upcoming include “Song One,” starring Anne Hathaway, “Alive Inside,” a documentary about how music helps trigger memory and “Under the Electric Sky,” a 3D documentary about a popular electronic music festival.

Now in its 30th year as the premiere showcase for independent filmmaking, Sundance is as popular as ever despite the challenging business models that persist for indie film. Distributors are nonetheless lined up to acquire films as buzz has built around titles including John Slattery‘s “God’s Pocket” and Joe Swanberg‘s “Happy Christmas.” The latter was acquired on Thursday by Magnolia in the festival’s first purchase.

Festival programmers credited the depth of quality this year, emphasizing sections devoted to films with lower budgets and documentaries. “When I took over the festival it was in the middle of the financial crisis,” festival director John Cooper told TheWrap on Thursday. “The biggest change I did was look at the categories and say ‘Are they representing the films being made?’ I didn’t think they were. That’s why we created the Next section (for lower-budget films). Those Next films weren’t making it in because there was no place for them.”

“Whiplash” was a strong start to the festival. Indiewire’s Eric Kohn labeled an epic solo in the film’s final scene “the best drum solo ever caught on film.” One member of the audience was so moved by the display that he asked who played the drums, much to amusement of director Chazelle.

Teller’s cadre of supporters read him the glowing praise as he stood in line for the film’s after party, a few spots in front of producer Jason Blum, who flew back from Mexico just to catch the premiere.

A feature-length version of Chazelle’s short that screened at Sundance a year ago, “Whiplash” is loosely based on Chazelle’s own experience in high school with an irascible conductor. The director employs the throbbing sound of a drum beat to convey Teller’s rocky, aggressive pursuit of greatness, and his tortured relationship with his conductor, played by JK Simmons. Simmons’ character berates his students, tossing around musical stands and gay slurs with equal pleasure.

“He’s lately been playing lighter-hearted roles, kinder roles,” Chazelle told the crowd, referring to Simmons. “When I first met him I said remember who you were in Oz? I wanna make that guy look like the teacher in Mr. Holland’s Opus.”

While Simmons’ menacing conductor was excellent, it is Teller who people will remember.  The actor has been climbing the Hollywood ladder in recent years, even  linked by TheWrap to the upcoming “Fantastic Four” reboot.”

This movie is not conventionally commercial, with several lengthy musical performances, but that didn’t stop Sony Pictures Worldwide Acquisitions from claiming international rights before the film debuted. Whether he is drumming so hard his hands bleed or walking away from a car crash to take the stage, Teller exhibits an intensity in the film not seen in more playful movies like “21 and Over” and “Project X.”

But Teller told the audience he almost didn’t take the part in the film, having just finished a movie when his agent called.

“I just wanted to hang out on the beach, but my agent said this is one of the best scripts I’ve ever read and you’re going to do this,” Teller told the audience.

He looked pretty happy with that decision Thursday night.