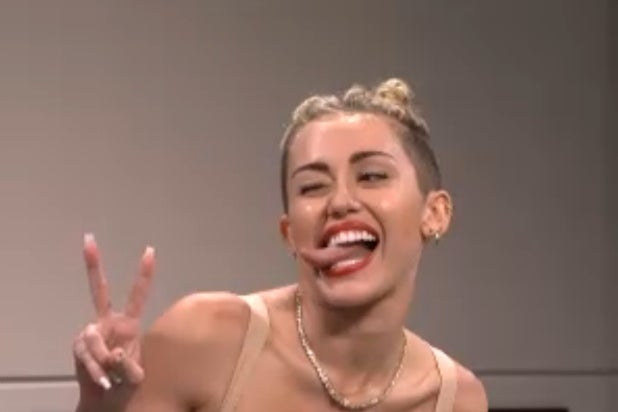 The Stroke Association may be hoping that Miley Cyrus is feeling guilty — and charitable — over a joke she made on “Saturday Night Live.”

During this past weekend’s “SNL” cold open, via the magic of television (and a great impression by Vanessa Bayer), young, “Hannah Montana”-era Miley met new-gen MTV VMAs Miley. Bayer’s innocent version asked the real Cyrus why she keeps sticking out her tongue, to which the pop star replied, “I’m having tiny strokes, Yo.”

“Having a mini-stroke is no laughing matter,” Patrick Olszowski, head of Campaigns and Policy at the Stroke Association, said. “Around 46,000 people in the UK have a mini-stroke (Transient Ischaemic Attack) each year, with one in ten leading to a major stroke.”

TheWrap’s requests for comment from Cyrus’ reps were not immediately returned.

He continued: “Sticking out your tongue is not a sign of having a stroke. Instead think FAST. If a person’s face starts drooping, they can’t lift their arm or they can’t speak, it is time to call 999. Having a stroke is a serious medical emergency. With the right care and support, as well as compassion from those around them, people can make fantastic recoveries.”

Here’s the video with the stroke joke in question: