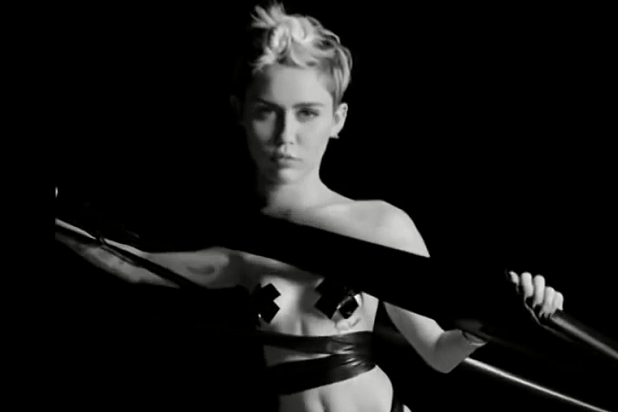 A spokesperson for Cyrus said in a statement that the “Can’t Be Tamed” singer and Quentin Jones, the director of “Tongue Tied,” would not be part of the festival, which kicks off in Brooklyn on Feb. 27.

“Miley was proud to make a film with acclaimed filmmaker Quentin Jones. Neither she nor Quentin are participating in this ‘festival’ in any way,” the spokesperson said.

After years of close calls, the worlds of of Miley Cyrus and pornography are officially about to collide.

But before you get too excited, zip up and read on.

The video, which aired as an introduction during Cyrus’ “Bangerz” tour last year, isn’t as explicit as some of the other entries in the festival might be. Directed by Quentin Jones, the video features the “Can’t Be Tamed” chanteuse topless (save for some strategically placed tape) and slathering herself in dark sludge. Which might still be your thing — in which case, we’re already applying for a restraining order.

A spokeswoman for Cyrus did not immediately respond to TheWrap‘s request for comment.

Can’t make it to New York for the festival? Watch the “Tongue Tied” video now.