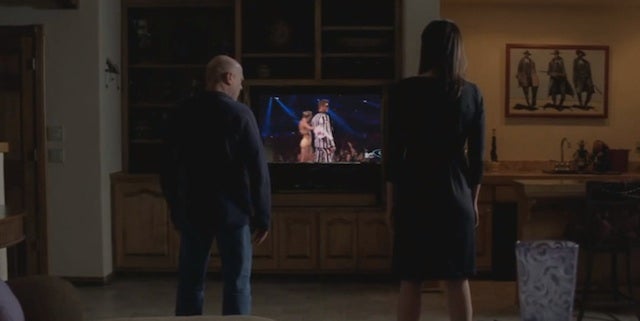 As if finding out your brother-in-law was a meth dealing kingpin wasn't bad enough, Hank and Marie Schrader were forced to watch Miley Cyrus give Alan Thicke's son a lap dance.

Like the Parents Television Council and much of Fox News' staff, the "Breaking Bad" couple were shocked – just shocked! – and disgusted by the "Hannah Montana" star's sexually suggestive MTV VMAs' performance. It was a calculated display of provocation that found Cyrus dancing in a skin-colored bathing suit and shaking her moneymaker with some dancing bears.

A humorous YouTube viral video puts a fresh spin on the cable news-fueled outrage by having the Schrader's react with horror, their jaws dropping in mutual disdain as they watch Cyrus bounce around on stage.

They'll never be able to listen to "Blurred Lines" the same way again.