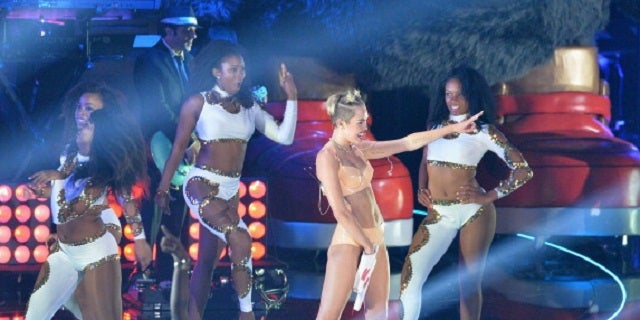 Don't worry, Miley Cyrus: the media might be dragging you over the coals for your raunchy MTV Video Music Awards performance on Sunday, but you have a friend in Adam Lambert.

The "American Idol" favorite provided what was seemingly the lone pro-Miley voice on the Internet, jumping into white-knight mode and declaring via his Twitter account, "Cut her some slack."

Lambert's defense of Cyrus' performance — which included liberal amount of twerking and a bawdy display featuring Robin Thicke, a foam finger, and Cyrus' wagging tongue — began with a tweet asking why everyone was "spazzing" about the segment.

And listen if it wasn't ur cup of tea — all good but why is everyone spazzing? Hey — she's doin something right. We all talkin.

He later clarified that he wasn't necessarily a fan of the performance — just that people should allow Miley to be Miley.

"Hold up! I didn't actually state whether or not I liked @MileyCyrus performance. I merely said she was having fun and to cut her some slack," Lambert noted. "Whew folks are all heated bout this. Hilarious. I can't help it that I'm a contrarian — just another healthy debate."

"Whataya Want From Me" singer Lambert, of course, is no stranger to controversial performances himself — he raised eyebrows at the American Music Awards in 2009, when he kissed his male keyboard player.

While Lambert may be providing a sympathetic stance for Cyrus, the "Can't Be Tamed" singer has been catching heat from most other corners, including MSNBC's Mika Brzezinski  — who's called for MTV executives to be fired over the incident — to Robin Thicke's mother, Gloria Loring, who criticized Cyrus as "misbegotten."