Itching to make her first investment, Camille Requiestas decided to bet on something her friends couldn’t stop talking about: bitcoin.

“I just did it kind of blindly, which is probably not smart. But I knew I wanted to invest in something,” the 28-year-old from Temecula, California, told TheWrap.

This was back in late November — right as the cryptocurrency frenzy was reaching a fever pitch. It wasn’t an absurd amount of money — about $500 — but every penny counted for the TV reporter after just moving to Texas. The plan was to leave her investment alone for a year — to not even look at it. But that plan was derailed when the price of bitcoin surged from about $8,000 to nearly $20,000 per coin in the span of two weeks.

Also Read: I Lost a Fortune in Bitcoin - But I'm Still All In

“My coworkers kept talking it up and saying ‘oh my gosh, we’re making so much money, it’s doing so well, did you check it today?” said Requiestas.

She wasn’t the only one caught up in the flurry. Coinbase — the major U.S. exchange Requiestas opened an account with — was adding hundreds of thousands of accounts per week. There was money to be made, and there wasn’t time to sit on the sidelines.

Cole Peterson told TheWrap as much. The 17-year-old high schooler from Irvine,California, said he went “all in” on bitcoin, along with a few other cryptocurrencies, around the same time. He’d made about $3,000 selling items on eBay, and wanted to be part of the next wave in technology. His dad and brother followed suit. Soon, watching his net worth balloon (in between applying for colleges) became a major rush. Visions of buying a new car danced in his head.

“You become sucked into it, and it moves very fast. It’s 24/7, unlike the stock market,” Peterson told TheWrap. “There’s definitely a major emotional component to it. Greed became something that was very prevalent in daily life and I didn’t think it was going to slow down … you become a little bit irrational.”

That energy from Millennial and Gen Z investors is to be expected, according to Gregory La Blanc, professor at the Haas School of Business at UC Berkeley.

“Part of it’s FOMO [fear of missing out], right?” La Blanc told TheWrap. “Everybody wants to be in on the next new thing. Everyone wants to be at the forefront, and no one wants to be a follower. [Cryptocurrency] offers a lot of excitement, and that’s exactly what you need if you’re going to build something up. You need a little bit of irrationality, of overoptimism. That’s why we have young people in the first place.”

Also Read: Mark Zuckerberg Is 'Worried' About Fake News, and 6 Other Things We Learned From Wired's Facebook Feature

Still, that confidence has been tested in 2018, even for true blue bitcoin believers. After touching $20,000 in mid-December, the price slumped to about $12,500 by New Years. A run back to $17,000 in early January is now a distant memory — with bitcoin free-falling to below $6,000 at one point in early February. And now, after a strong push, bitcoin is back to around $10,000 midway through February. You’re probably starting to notice a theme: cryptocurrencies are remarkably volatile.

For Requiestas , the fall left her smarting. A fresh batch of friends replaced the old jubilant crowd, telling her bitcoin is a “huge conspiracy” on behalf of the government (it’s not). When asked if she’s told her family about her bet, she said she’s held off because “they’d think I’m crazy.” 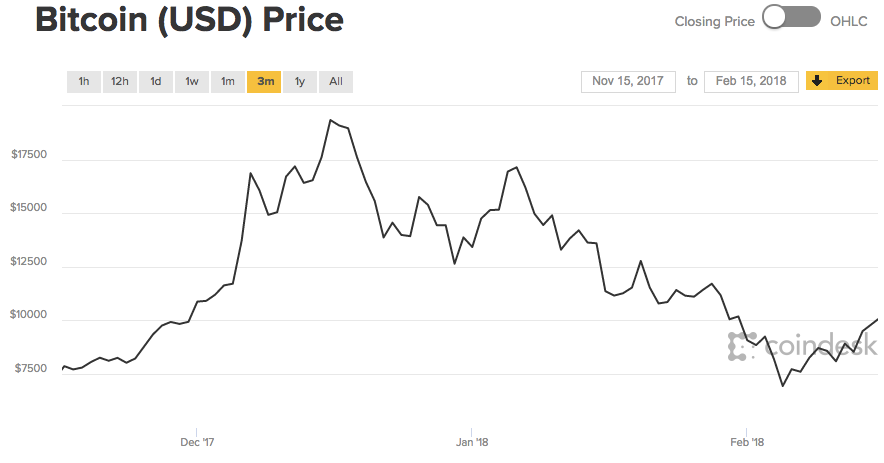 The recent downturn was a buzzkill for Peterson, too. “There’s that equal kind of greed and excitement going up, as there is fear and uncertainty going down,” he said. But instead of shaking his “faith in the technology,” Peterson said the dive has given him a thicker skin — something needed to survive the crypto-world.

Bitcoin’s recent swoon has given its critics ammo, with many comparing it to the Y2K dot-com bubble. Others have said it resembles tulip bulb mania, dating way back to the 17th century. Professor La Blanc said there’s “clearly” bubble characteristics at play: unsophisticated investors, a new asset type, and not much liquidity. Still, that doesn’t mean blockchain — the underlying ledger bitcoin and other cryptocurrencies are built on — is going way anytime soon. This semester, La Blanc co-founded one of the nation’s first courses on the budding technology.

“There are people that ridiculed analysts that priced Amazon at $400,” said La Blanc, noting the e-commerce giant now trades at quadruple the price. “Out of all this froth will emerge some very transformational businesses.”

The bubble talk hasn’t dampened enthusiasm on campus, either. Max Fang, the 22-year-old who led the “Blockchain at Berkeley” group for three years before recently stepping down, believes it could be for the best in the long run.

“I kind of agree [with the bubble speculation],” Fang told TheWrap. “Once the bubble pops, people will be focused on the tech again. Right now there’s too much money and not enough talent.” An investor in bitcoin since 2014, he laughs when asked if the current slide is something to worry about: “It’s just another opportunity to buy more.”

That optimism is mutual among those interviewed by TheWrap. After experiencing both the rapid runs and migraine-inducing dips, none of them are jumping off the ride just yet.