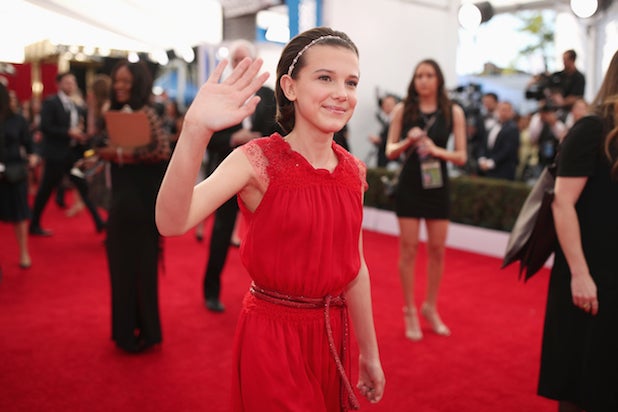 Millie Bobby Brown, who plays Eleven on Netflix’s “Stranger Things,” is only 13-years-old, but she has already committed to activist work.

On July 17, Brown started a Twitter account, @milliestophate, dedicated to preventing bullying and cyber bullying. In a phone interview with TheWrap, she opened up about how she’s a “victim” of bullying herself.

“I was seven when I was bullied by a boy,” Brown said. “No hard feelings, I got over it, but I did have to move schools because it was very hard, and I felt like I couldn’t talk to anyone. I would talk to my parents of course, but it’s annoying because you don’t want to leave a school where you have your best friends at.”

Brown said she started the account for those kids who feel they can’t talk to anyone at home or at school, but “they can talk to Eleven from ‘Stranger Things.'”

“I created the account to show positivity and love,” Brown said. “I just want to show that if you share it with people who need it, it really does help.”

Brown said since beginning her acting career, she’s been home schooled, but she’s been no stranger to cyber bullying. She said she was recently following “bad accounts” that she didn’t realize were inappropriate, and she got hate for it.

“You pick a flower up, and they’ll be like, ‘You did that wrong, you did this wrong,” Brown said.

Brown has inevitably gotten backlash from even creating the account, but she’s been able to communicate with fans, retweet them and even provide advice.

“Be sure to taste your words before you spit them out,” she tweeted on July 26. “Don’t let it stop you from living your life,” she told one follower.

Be sure to taste your words before you spit them out.

Don't let it stop you from living your life. https://t.co/4HtcMX3jhZ

Brown’s a teen, and though she knows she’s no expert, she says she understands what others are experiencing because she’s been through it.

“We need to stop bullying and cyber bullying,” Brown said. “It’s ruining people’s lives. And I think that creating the account was for me and a lot of other people.”